The most anticipated part of our three day weekend was Saya taking her first flight.  I tried to quiet my anxious feelings by pinpointing exactly what I was nervous about.  I recognized that we wouldn’t be able to get off a flight the way you can do with a bus or the tube, but that wasn’t quite it.  No, it wasn’t that passengers would crane their neck to spot that baby crying again.  Like the flight attendant noted “We’d never see these people again”.  It was the ‘fasten seat belt’ sign.  That we would need to remain in our seats at specific times.  I wouldn’t be able to ‘shh shh shh’ her standing up at my whim.  Corey wouldn’t be able to do the ‘electric slide’ in the aisles to quiet any spontaneous cries.  We would be at the mercy of that signal and be stuck with whatever Saya was feeling at the time until we could stand again.

I shared my worry out loud with Corey which helped me prepare for the flight.  We’ve heard her cry longer than the ‘fasten seat belt’ sign would be on in the first two weeks of her life.  We could do this and so could she.  We rose at 3:30am to catch an express train to Stansted airport.  Security was thorough but pleasant, and there was only a slight delay for the flight.  We boarded, and at least three people cooed at Saya while finding their seats.  She sat unaware, pulling on the drawstrings of the hood of her dad’s raincoat.  Security features were announced along with a quick apology for the delay, and then the light blinked on signaling we were to remain in our seats.  Lockdown time.  I inhaled.  I fumbled with a muslin cloth to get it over my shoulder to feed Saya during take off.  Corey heard this is comforting when ears pop.  Then I had to make sure that Saya wasn’t kicking the person next to me while she fed.  Corey ensured her infant seat belt was fastened.  Then we took off and…Saya was perfect.  She didn’t cry.  She wasn’t fussy.  She fed until the ‘fasten seat belt’ sign was turned off.  I was able to stand when she needed to fall asleep and then we disembarked.  She slept on Corey for the hour bus ride from Bilbao to San Sebastian.  I exhaled.  The start of this was many successful firsts for this weekend.  For this post, I’m attempting to use Saya’s firsts to set up the narrative for each incredible day in San Sebastian with our new family.

I texted Corey this screenshot to remind him to come home after his after-work drinks on Thursday night. 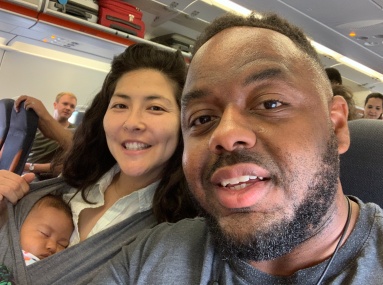 We’re on an airplane! Thanks for the sollywrap, Auntie Erica and Uncle Brian. 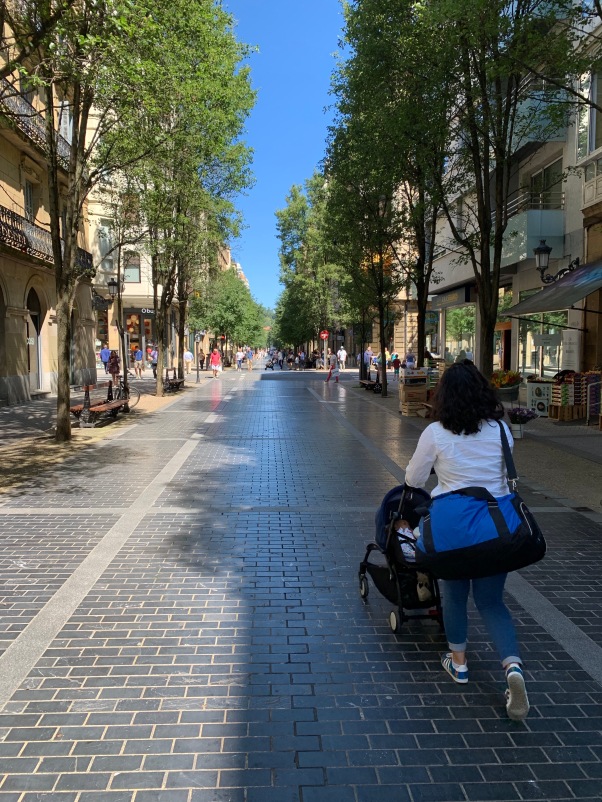 The most obvious place to start is that this was our first time in San Sebastian.  It’s a town famous for food, particularly pintxos, or small bites (pronounced pinchos).  We were prepared.  We had three different lists about where to eat within a two mile radius.  Our lists all confirmed that Bar Nestor should be the first stop.  Saya slept while we chowed down on Chuleta de Vaca Vieja and a simple tomato salad.  Perfect combo. 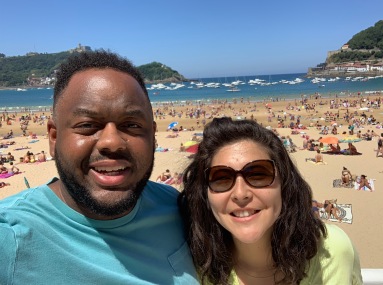 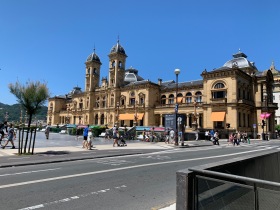 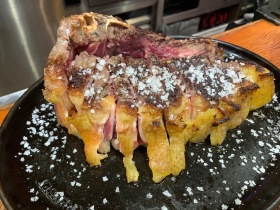 We skipped the padron peppers as our eyes were set on the next pintxos bar, Gandarias.  Finally, we finished our lunch rounds at La Vina for their famous cheese cake.  You probably guessed this entire post is likely to be about food and more food. 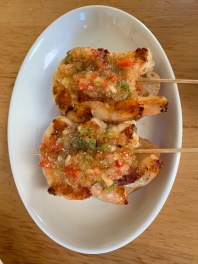 Shrimp and garlic and BACON 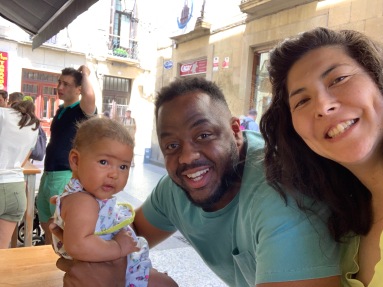 It was surprisingly easy to keep up with Saya’s rhythm of eat, play, sleep and it was my first time letting her settle herself in her pram when it came to various nap times.  We used these opportunities to walk the streets of Old Town and shop before starting pintxos round two.

At Mason Martin, we tried Txakoli (pronounced chacoli) for the first time.  This led us to stay out past her bedtime, a decision that predictably ended in tears outside the restaurant.  The evening consisted of Saya’s first bath in a hotel sink, a first bedtime with blackout curtains (which we sorely need at home), and her first time falling asleep in her travel cot without tears.

Saya woke on her own at 6:45am.  Thank you, blackout curtains.  We ventured to Tabakalera, an old tobacco factory repurposed into an art space.  It was Saya’s first time seeing Vivian Maier photos, and her first time posing with street art. 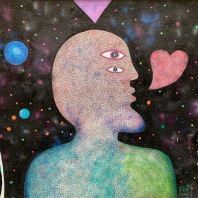 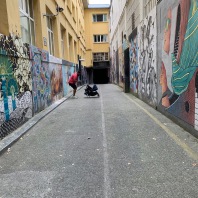 Dad getting the perfect photo.

Here is his work of art.

We walked to Gros, a neighborhood behind the surfer beach, and outside the old town.  Bodega Donostiarra is a great lunch.  We recommend the tuna, anchovy and pepper pintxos along with the bonito bocadillo.  Instead of Txakoli, try the sidra (cider) and have an additional plate: chorizo tortilla.  Skip the octopus. During this meal, we watched Saya be lulled to sleep by a brass band.  This was a first, and likely a last, for nap time.

To take a break from eating, we strolled to the beach to watch the surfers, and then circled various blocks farther out to get a feel for some of the neighborhood blocks.  The number of abuelas who pinched Saya’s cheeks was pretty impressive.  I finally caught one in a photo below.  We snacked at El Doble where you should get the ham bocadillos.

Across the bridge, back in Old Town, we sampled Mari Juli (smoked salmon pintxos with anchovy), garlic calamari and albondigas at Goiz-Argi.  Betti-jai is right down the lane so we picked up some more bites.  Later we found out this is a Michelin star spot but I’d still crown Bar Nestor and visit Bodega Donostiarra before going back to Betti-jai.

Back to old town

Calamari at Goiz-Argi (best choice in my opinion) 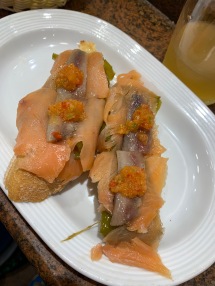 I picked out Saya’s first popsicle at Loco Polo: vegan horchata with dark chocolate and caramelized peanuts.  She sat patiently as we devoured our treats, and I’m enjoying the fact that she has no clue about sweets, and therefore doesn’t grab at anything. 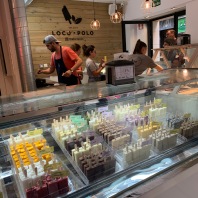 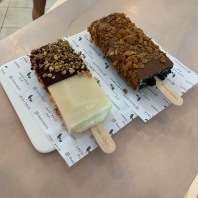 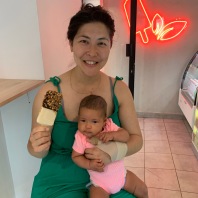 Then, a wonderful thing happened after my late afternoon nursing session with Saya.  We got up from the bench, rounded the corner, and ran into a large gathering of people.  There was a stage with live music, and many people milling around with drinks.  We had just walked into Saya’s first wine festival.  Tickets for ten Euro provided three glasses of wine on site, and a souvenir bottle of wine to take home.  It was unreal.  Armed with our tickets, we sampled whites and roses.  I placed my glass down briefly on another couple’s table to take the picture of Corey (below), and they offered to take our first non-selfie family picture.  It turns out they were from Mill Valley, and the woman was Sansei from Hawaii.  Such a small world, and such an amazing ending to day two! 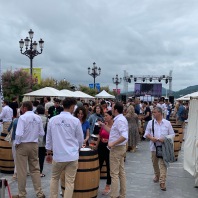 *I started this post with Saya’s firsts, but today, Corey’s first takes the cake: his first nectarine (not really, but he was born again!) This was probably the best thing we ate all weekend.  Seriously. You can’t argue with this video.

On our final day, Saya had her first trip to the beach.  She wore sunblock for the first time.  She donned her swimsuit (Thanks, Tata Sam!), a pink bucket hat (Thanks, Auntie Sarah!), and she felt sand and the sea on her toes- all firsts for our baby girl. 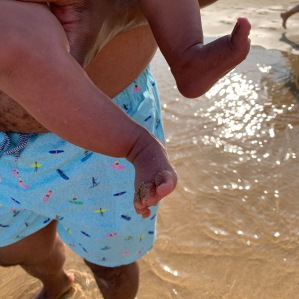 The best meal of the day was at our first stop: Atari Gastroleku.  The huevo a baja temperatura, the smoked sardine pintxo, and the bell pepper pintxo were ace (as they say in London).  I also thought the mari-juli was better here than yesterday’s stop at Goiz- Argi.  PS: Saya slept in her pram under the table!

Mari Juli and… I’m not sure the other one.

Smoked sardine had me at hello

We visited Bar Baztan.  Most of their pintxos attempted to display the tallest mounds of food on top of a single piece of bread. Bar Narrika wasn’t crowded but I wasn’t mad at their sardine toast.

Before we knew it, it was time to catch a cab to the bus station for the coach back to Bilbao.  Saya slept against my chest while Corey and I recounted all of the firsts I should include in my blog.  My nerves didn’t come up once on the bus ride.  This flight was the first time Saya flirted with strangers.  She smiled at two different women in line.  This flight went even better than the first (she slept on Corey the entire flight while we watched Knock Down the House).  We caught ‘the not Gatwick Express’ on accident and Saya was alert as ever but not fussed at all that it took so long to get to Victoria station.  Would you believe we sat next to a family from Berkeley?!  She did the last leg of the trip asleep on the tube to Highbury and Islington station where I snapped this photo once we got back into our neighborhood.  We were impressed with our offspring to say the least.  Saya gave us so much confidence for our upcoming travels.  She’s made this first family vacation a special memory. 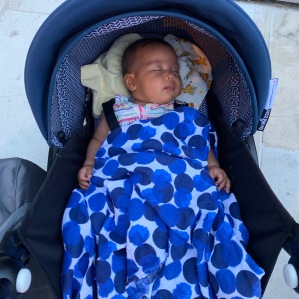 Quick Hits: I’m super thankful for the restaurant suggestions from friends and created this googlemap before we left on our trip. Upon return, I’d list these as my top recommendations: