*The following posts about Andalusia document our trip together before I was grounded (no longer able to fly while pregnant).  However, I am blogging about these adventures post-baby, and appreciate the patience it will take for me to upload/complete these posts between parental duties.

23Feb2019: On a random search for lunch between our drive from the Malaga airport to Granada, two blogs mentioned Riofrio- a town to dine on trout and caviar.  I’d have to forgo the caviar but we ended up ordering trout two ways (plus roasted pork).  We didn’t spend a lot of time in Riofrio other than peeking at the small creek running under a bridge near the restaurant. It was a super clear stream which we assumed was the Rio Frio.

This was the appetizer! Trout lox (which I preferred over the smoked trout for lunch)

Corey’s pork lunch. Despite the trout being the key feature, it was a very delicious plate. 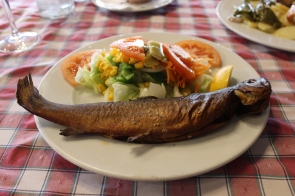 Lynn Bynn- your true love in Spain: Fanta Limon. I ended up getting this drink almost every meal to celebrate you.

The landscape on the drive to Granada wasn’t particularly picturesque but no matter as I’ve been wanting to bring Corey here since we moved to London.  I wanted to retrace my favorite steps from a trip with my family from almost a decade ago, starting with the restaurant overlooking the Alhambra.  We celebrated Miya and Jose’s engagement many years ago at this memorable restaurant: Que Romantica!  Unfortunately, Jamie Lynn stopped writing in her travel journal after Alicante, the stop right before we reached Granada!  Our only memory was that the restaurant had a green door and was somewhere in the Albayzin, Granada’s historical Moorish neighborhood.  After Google helped us find a couple of images of restaurants with green doors, we booked one that seemed somewhat reminiscent.  We were greeted with an incredible view of the Alhambra. I can neither confirm or deny it was the same restaurant from 2010 but Jamie’s random internet search for Restaurante Las Tomases was worth it.  I’d still say Que Romantica!

The evening walk to the restaurant.

Mushrooms with almond sauce. Not displayed wonderfully but it was tasty

The tomato salad wasn’t worth the cost as the tomatoes weren’t in season.

Corey got some fish dish. Not really memorable as well.

24Feb2019: We’d recommend our Airbnb in the Realejo neighborhood on Molinos street as it’s perfectly placed by a bus stop (30 or 32) to get us to the Alhambra grounds for 8am on Sunday morning.  I was eager to have Corey see the Nasrid Palaces with as few people as possible so 8am on a Sunday seemed like a good bet.  We could sleep in every other day on our Andalusian road trip I told him.  His skepticism melted as soon as he stepped foot into the first foyer.

Someone was flying a hot air balloon over the city before 8am. 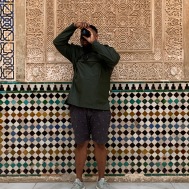 First reflection pool is behind the manicured shrubs. 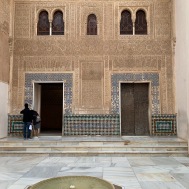 I have a picture of my dad in the far right corner sitting on the steps. Had to take a picture as I remembered that picture so clearly. 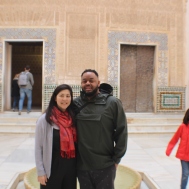 The detail and design is stunning. I’ve never seen anything like it.

As I predicted he ran around like a kid in a candy shop, catching the best light, and craning his body into odd corners for the best angles with the camera.  The patience he shows when he wants to capture a shot is like watching a predator crouch in the tall grass for prey.  He springs out to mark the territory he wants and then sets up the shot without anyone in sight.

I guess Corey wasn’t the only one chasing light

The Court of Lions 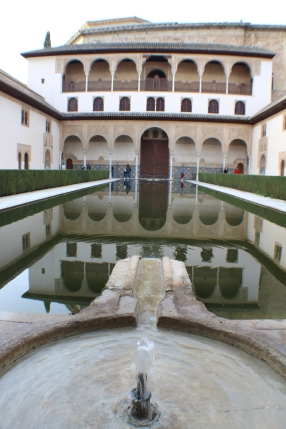 I couldn’t tell you what room this was. I just can’t get enough of the design!!!

Breathtaking at every turn.

We were fatigued once we entered the gardens and moved towards the Tower, but I thought it was necessary for Corey to see more of the grounds.  My personal opinion is the tower has a great view from above, but the Palace is the true gem. 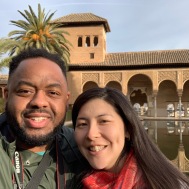 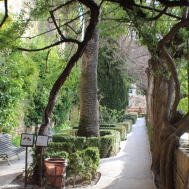 The Nasrid Palaces and the Tower took us until the late morning when I needed a rest (and a pan chocolate that I didn’t want to share).  I rested on a bench near the gift shop while Corey mapped our next steps.  The Alhambra was as far as I’d planned and the rest of the trip would be based on suggestions from our Airbnb host.  We cabbed up to the Mirador de San Nicolas. The pictures speak for themselves.  We ate at Restaurante Palacio Andaluz Teteria Almona for a Moroccan lunch with a delicious limeade drink with mint. 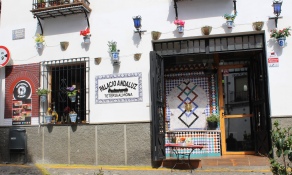 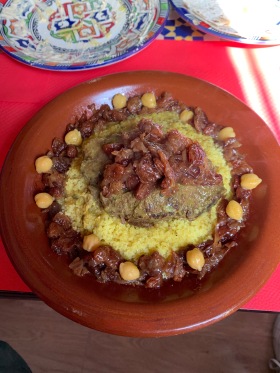 We walked down the hills of the Albayzin to the Catedral and wandered the streets near Plaza de Bib Rambla.  We dipped in and out of the shops, took breaks in the small plazas, and paused when buses tumbled down the narrow roads.  For dinner we ate at no-frills Los Altramuces on San Matias.  It might have been labelled beige buffet if not for the padron peppers, but the food was good and cheap.  No complains from our barstools as we took in the evening with the locals. 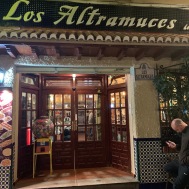