I didn’t realize the Leaning Tower of Pisa is set alongside other picturesque buildings in the center city plaza.  The evening hours were perfect for a viewing with few crowds and few selfie sticks.  We ate just off the restaurant row at a steakhouse surprisingly full of locals.  We didn’t order the steak though.  Il Toscano’s bean soup and testaroli pasta were worth going back to– which we did when we returned to Pisa on our last night.

The train from Pisa Centrale to Firenze Santa Maria Novella station is a quick hour.  In less than ten minutes, we were circling the Duomo and the staggering line that wrapped around it.  It was enough for us to admire it from the outside.  Our reservation for the day was to the Galleria dell’Accademia.  We chose to tour on our own which means we likely missed many of the Galleria’s treasures but the David was our focus, and it was surprisingly easy to complete this mission.  You’ll see replicas of the statue all over Florence, but seeing the original statue puts into perspective how much of a feat it was to carve David from a single block of marble.

Walking over the Arno to Pisa Centrale for the 7am train.

Around the backside of the green and pink landmark 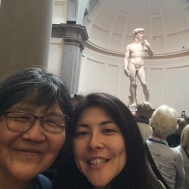 I can’t recall ever seeing someone black in a painting during this time period. But it was the first of a few in Florence.

The evening before leaving London, my mom was online, fruitlessly searching for areas to capture Florence’s graffiti art scene.  I don’t often use the word serendipitous but we happened by the Medici apartments and noted a Banksy exhibit had opened just one day prior!  The exhibit featured many of his most recognizable images with many quotes from his book Wall and Piece, and culminated with the Sotheby auction’s self-destructing frame. 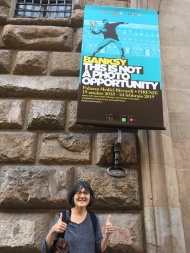 Happy Choppers. ‘The greatest crimes in the world are not committed by people breaking the rules but by people following the rules. It’s people who follow orders that drop bombs and massacre villages.’

Rats are ‘hated, hunted and persecuted….and yet they are capable of bringing entire civilizations to their knees’

We took Wayne Christman’s advice to visit Mercato Centrale, but were too hungry to heed his warning of avoiding the market during lunch hours.  The top level is a zoo at this time, but if you opt for buying your own bits and bobs on the ground floor, you can get away with enjoying a few options without someone’s elbow in your fried calamari.

Shopping with my sweetheart.

Holy steak! Didn’t take on the classic Florence steak on this trip, but I hear it’s something else!

Parmesean by the pound. 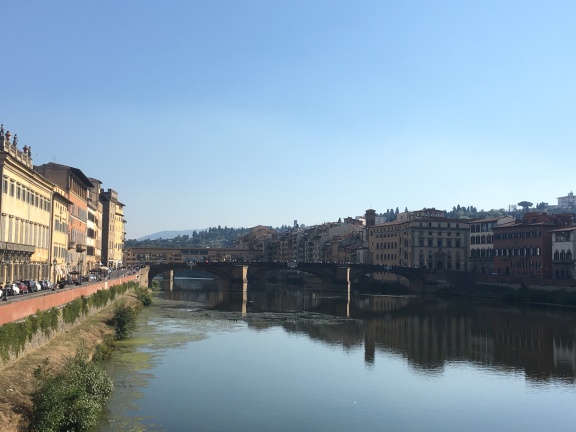 After dropping our bags at the airbnb (ask me about it because it had a lovely garden!), we recharged with a quick power nap before regrouping for Santa Croce Basilica.  I had zero expectations for this one so that’s likely why it was likely my favorite landmark of the trip.  I’ll put the names on the tombs in the captions so if you’re planning to visit you can have a similar reveal when you arrive.

The tomb of Galileo

I had no idea we’d see this one. Galileo’s tomb is barely marked!

The statue on top is the inspiration for the Statue of Liberty.

Time for a lovely break at Rivoire, another Wayne Christman suggestion.  It’s prime for a hot chocolate lover who also needs a coffee fix.  Our airbnb shared that locals don’t drink anything with hot milk after 10am unless they are sick, or unless they are children, but a hot chocolate mokachino needs milk and YOLO.  The Gucci Garden was right across the plaza as our last stop of the day.  It’s a showroom sharing details about the designer’s life, concepts and current inspirations.  Everything in the shop is exclusive to the space.  The highlight was seeing the piece that sparked the revival of Dapper Dan, putting his legacy in the well-deserved spotlight.

The loafers, the slides, the glitter & gold.

Eula, this made me think of you.

Dap’s jacket on display in Florence in the Gucci Garden. Welcome back.

We dined at a local fish restaurant called Burro & Acciughe.  The fisherman’s pasta with fresh tomatoes is likely making my dad’s mouth water as this is often a ‘go-to’ dish for him.  My mom’s seafood mix grill starred octopus and langoustine- a yummy combo!  Then we entered the gelato foray and we weren’t at all deterred from waiting in line at Gelateria La Carraia.  Pistachio, and coconut for me and salted peanut and dark chocolate for my mom.  We planned to take our gelato back to our indoor patio to reflect on our first day but you’re correct if you predicted that our gelato barely made it past two blocks before being consumed.

We took an invigorating walk up and down hills to reach Chiesa di San Miniato al Monte for 10am mass.  My mom’s motivation for visiting was to listen to the Gregorian chanting, and mine was to see the lookout at the top of the hill.  The extra 15 minutes up the hill and stairs to the monastery is a much better view than you get from neighboring Piazzale Michelangelo.

Walk to mass. This was a downhill slope.

We thought we reached the top, but alas, more stairs.

Mass begins. I’m not sure about the ladder in the background.

Cemetery on the side of the church.

Lookout that is above Piazzale Michaelangelo.

We meandered down the hill for a quick panini and juice before our reservation at the Uffizi Gallery.  Along the way, I pointed out different street signs that seemed to be inspired by Clet, and artist that revises the red ‘no entry’ signs.  My mom developed a keen eye for spotting it herself along our walk.

Even with a pre-purchased timed entry ticket, we waited about 40 minutes to enter the gallery.  I’d hate to find out how long it would take without a booking.  Again, we had little direction without a guide, but we’d suggest starting at the top and making your way down.  My favorite rooms housed pieces by Botticelli.  This was likely due to the fact that many of his pieces centered women.  We also saw an unfinished Da Vinci that looked almost haunted, and a room of urns with Grecian myths carved into the sides.

I felt like this statue’s eyes were following me the entire time we stood in line.

I was able to identify the Greek myths along these three sarcophagi.

Another person of color on display.

Top floor hallway at the Uffizi. 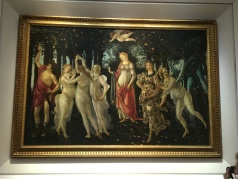 This picture welcomes you into the museum. It’s the same picture that K.Wiley used as inspiration to paint Michael Jackson.

After about two hours, I wanted Perche No! gelato which many friends suggested.  I googled gelato while my mom finished up her laps on the first floor.  It’s just 5 minutes walk from the Uffizi and surprisingly uncrowded.  This snack energized us for the next chapter in our 3-part ticket: Pitti Palace and Boboli Gardens.  Pitti Palace shifted our understanding of modern art.  Pitti Palace didn’t display any art dedicated to the Christ for four rooms, which signaled to us that modern artists began to focus more on portraits, landscapes, and still life paintings.  Boboli Gardens are right behind the palace.  If you’re into hills and wandering, then this garden is for you.  If you’re at the end of your double- gallery tour, then cheat like us, and only walk the flat paths. 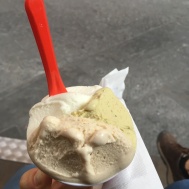 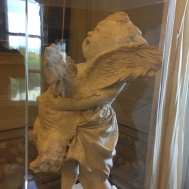 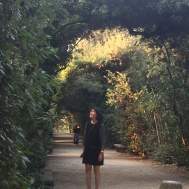 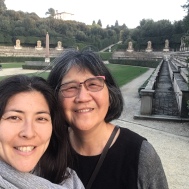 Osteria Santo Spirito didn’t disappoint with teeming plates of pasta and yummy zuppa de fava.  We highly suggest making a reservation if you’re only here for a short time.  We had leftovers for to take with us on our day trip the following morning.