Barcelona Through New, Yet Older Eyes

“It’s…like…in your face amazing. Wow!”: My mom’s first words when we got out of the metro station at Passeig de Gracia.  I had just pointed out Casa Batllo was directly across the street and it blew her away.  She said she imagined Gaudi’s architecture to be tucked away, maybe more like a garden or museum space, but not lining the streets alongside regular buildings.  It was even better when I could point out that Casa Mila was also just up the street on the way to our Airbnb.  Off to a good start in Barcelona!

Our host suggested eating at a spot on Placa de Rius, the neighborhood plaza.  Cadaques had a tasty tortilla, and it was also a good time to introduce my mom to pan con tomate which we ordered at about every meal. 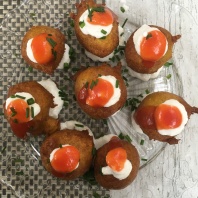 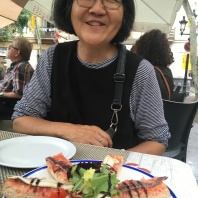 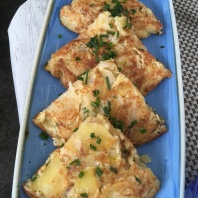 It began to pour as we navigated our way to La Sagrada Familia so we caught a cab to ease the journey.  La Sagrada Familia is the belle of the ball in Barcelona.  My mom’s face was priceless, numerous times over.  We both loved how much Gaudi paid hommage to the natural world by incorporating organic structures into his designs.  The columns built like tree trunks, the window panes like bee hive hexagons, and the stone arches like the rib cage of a while. 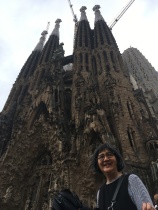 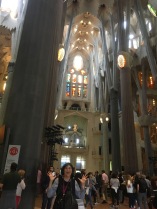 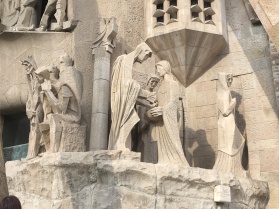 With the sun now shining, the next step was Park Guell.  My mom conquered the steps up to the look out above most of the park.  We just missed the last entry ticket into the Gaudi pavilion, but enjoyed the structures free to the public.

After the long walk up to the look out and back. These steps got nothing on my mom!

On our walk back to the flat, we found Brotzeit, a local bakery with a delicious seeded bread.  We made a make-shift dinner with our loaf of bread, tomatoes, and lunch leftovers before our evening show at the Palau de la Musica.  The show featured Barcelona Guitar Trio & Dance paying tribute to Paco de Lucía.  Two flamenco dancers were both stunning and the guitarists told the narrative between dances with both humor and historical reference. We finished the night with churros, one filled with caramel and the other coated in dark chocolate. 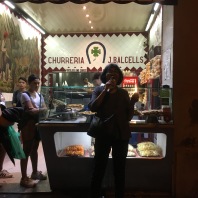 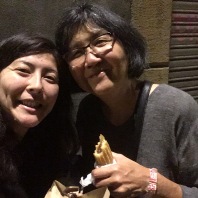 On Sunday, our first stop was Fundacio Joan Miro.  We found Jardins del Teatre Grec on our uphill walk to the Miro museum.  The name is pretty literal and it was a lovely pitstop at the based on the museum’s hill.

Greek Theater in the gardens

I know I’ve seen so many European terraces but I love the balconies!

The stairs up to the museum.

My mom spotting green parrots in the sculpture park outside the museum.

I knew that Miro played with simplistic shapes and vibrant colors, but I didn’t know he studied haiku and wanted his paintings to convey few brushstrokes the way haiku poetry has few words.  I also enjoyed the various galleries that featured his sculpture and his tapestry work.  We finished our morning visit with a coffee and cake in the museum cafe.  Though I’m not a coffee drinker, Jamie Lynn and I remembered that Spanish coffee is super tasty and that it doesn’t make us jittery.

Welcome to the Miro Museum. 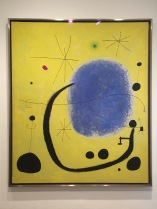 The Woman. The Man. 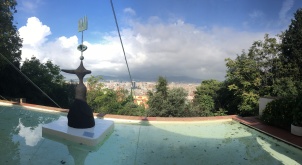 Lookout from the pond. 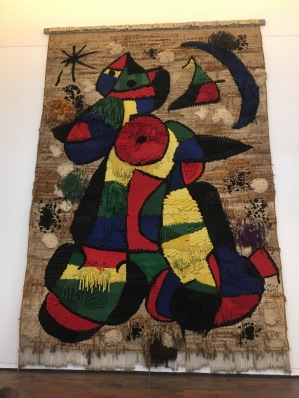 We rode the funicular down through Montjic into Poble Sec.  Next stop: subway to the Picasso Museum.  However, the line was around the block at the museum so we opted for lunch instead at Bodega la Puntual in El Born.  The atomic bombas had just enough heat and of course, we had to try to the Joselito tortilla with potato and chorizo- just like Jose’s signature dish.  After lunch, I attempted to recreate a Sandeman walking tour through El Born and Barri Gotic, but I lost the thread around Picasso’s mural. 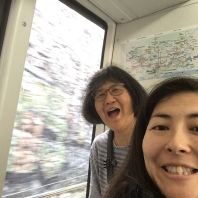 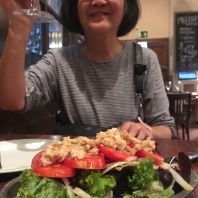 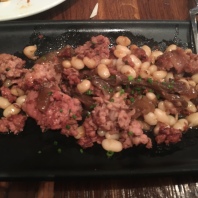 But anything can be solved with churros con xocolat at Be.

We walked to Casa Mila ready for more Gaudi.  Casa Mila aka La Pedrera (the stone) has two names because when the building broke ground there were large stones and rocks blocking many of the main roads.  This building was Gaudi’s final project before dedicating the rest of his life to La Sagrada Familia.  You tour the flats from the top down.  The roof includes soldier-like steeples, and sweeping city views.  Then you visit the attic which doubles as a mini-museum, chronicling Gaudi’s inspirations, methods, and most well-known structures throughout Barcelona.  This bit was great for my mom because she could see video and scale models of Casa Batllo as well as some other lesser- known buildings.  The living quarters were anti-climatic for me other than the door and cupboard handles.  Gaudi created these as ergonomically as possible by squeezing a piece of clay in his hands to cast grip-able structures for all of the door handles.

Gaudi hung these chains and then placed a mirror beneath them to establish the structure of his historical cathedral. 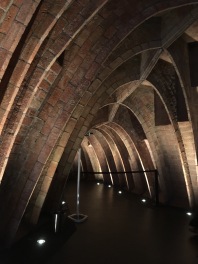 The arches were inspired by the ribcage of a whale.

The audio guides have GPS so you aren’t required to press any buttons. The recording starts when you are in front of a location with aligned audio. 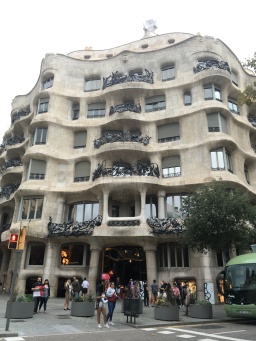 Dinner was at a family-friendly paella spot.  Though I was tasked with eating the paella because it ended up having clams even though we asked before ordering (my mom is allergic).  She opted for the fish of the day, and the shining star of the meal was the tatine- a baked apple tart that I will ask Sam about. 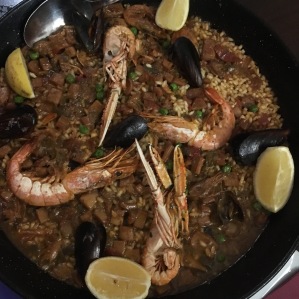 We tidied the Airbnb and just before getting into the Uber, I happened to check our flight status.  The departure for London was delayed four hours due to weather!  At 5am, we were locked out of our Airbnb, and ate our hard boiled eggs with our seeded bread on a city bench.  These trusty benches had been our friends when we needed breaks around Barcelona, and they didn’t let us down now.  Though we were locked out of our Airbnb, we took on this adventure for our final morning in Barcelona.  We walked to La Boqueria Market which would open at 8am, and crossed our fingers we could find a cafe catering to the early market workers.  We found a haven at Cafe 365!  We huddled here, as the rain poured down, drinking hot chocolate and reflecting on our trip.

The rain let up right as the market opened up.  We strolled the stalls for my mom’s first jamon iberica bocadilla before heading the airport. 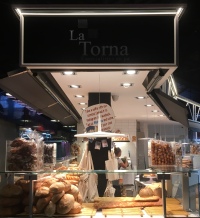 A flight set to depart at 7am didn’t take off until 12:45pm but that couldn’t dampen our spirits after a weekend getaway for my mom’s trip to Barcelona.