I should mention that the past events in June and July have occurred in the summer season, but with my new job, this means that summer isn’t really a time for full-on vacation.  It’s actually the busiest time of the year for teacher trainers because we are welcoming in new cohorts of trainees to summer school.

Ark summer school took over my first three weeks of August.  I had serious nerves around memorising over fifty hours of content, and holding all the Ark requirements in my head, but these melted away when I met my new teachers.  I ran my sessions like a mini-classroom, with my new teachers as my pupils.  Of course, the ‘classroom element’ was to highlight best practice, but it felt natural to slip in and out of my ‘teacher hat’ and my ‘tutor hat’.  Building in time for ‘parking lot’ questions, pushing rounds of practice with Teach Like A Champion techniques, and concluding daily sessions with shoutouts and ‘cleaner than you found it’ meant that I could bring my Infinity love across the pond to London teachers.  For data protection reasons, I will avoid posting pictures of our training sessions but I’m proud that I had such positive feedback from my trainees after each week.

After completing the first week of summer school,  I wanted a break from all things teacher training.  The ‘On the Wall’ exhibit at the National Portrait Gallery was the remedy I sought.  It’s a strong collection commissioned for or inspired by the King himself.  Not surprisingly, my favorite piece was by Kehinde Wiley, who captured MJ in all his majesty (see final pic below).

This artist wrote the lyrics of the entire album all over this album cover.

Corey checks out the articles and opinion pieces

This painting is on Ghanaian funerary fabric was made a year after MJ’s death, and is based on the last cover in his lifetime.

Wiley depicted MJ as a monarch of yore, King Philip II, on a steed in exquisite armor.

Fast forward to the three day bank holiday that punctuated the final weekend in August.  With summer school said and done, and the final admin bits sorted, I ventured to Almhult, Sweden (pronounced Elm-hult) to visit my cousin, Kelly, and her clan.  The easiest way to travel to Almhult is via the Copenhagen airport, and then riding a two hour train.  Though the welcome into Copenhagen was a bit rocky with the train lines down, after numerous transfers, the weekend in Almhult was such an escape from central London! 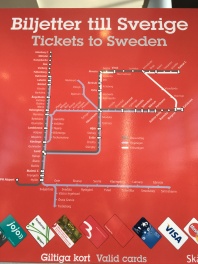 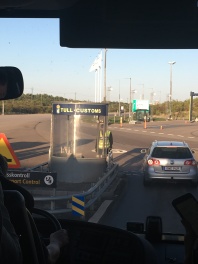 Bus across the border from Denmark to Sweden

I needed to get to Hassleholm

I think I’m finally aboard the correct train!

Because my seat was 333 (and 33 is my favorite number), I took this as a positive omen

My Aunt Sue and Uncle Ken were visiting Kelly, Brian, Finley, and Polly from San Diego, and my weekend trip overlapped with theirs for about 36 hours.  So fun to catch up with two sets of McKelloggs at the same time!  Sue and Ken travel all over the globe, and had just stopped in from Berlin and Copenhagen before making their way to Rotterdam for Aunt Sue’s conference.  It was also the end of a big week of stories for the Swaine family with Finley’s first week of school, with putting down their beloved pup, Poppy, and with Kelly and Brian’s 12 year anniversary on that Sunday.

On Saturday morning, Kelly and Brian were wizards at whisking kids and guests around with only one vehicle.  Brian and Finley took the car to basketball clinic, while Kelly (and Polly) led us on a walking tour of the town center, flea market, and spirits store (government owned and only open for a few hours on Saturday – like in Oslo).

We reunited at a cafe where Finley ate a pesto chicken sandwich about half his height, and where the adults fueled up on coffee and chai lattes.  The plan was to meet at home for more sandwiches (and Polly’s nap) before the next round of activities.

That afternoon, Kelly and Finley first drove us to the tubby slides, and around outer Almhult to see the kids’ schools, IKEA offices, and the lake where they’d spent a lot of time this summer. 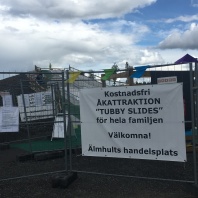 Large rubber innertube-like rings with plastic bottoms for the whole family to enjoy! 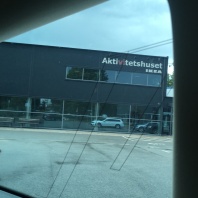 Then, Brian and Finley rode bikes to see Hotel Transylvania 3 while Sue, Ken, Polly, Kelly and I drove to the Ikea museum.

The caption said ‘perfect for a picnic: one for coffee and the other for sausages’

Welcome to the Ikea Museum. 75 years in the making!

You have to look closely but can you see the allen wrench?! I love how grand the display is for this iconic Ikea tool

A very quick bit about what I learned at the museum:  Prior to the 1930s, Sweden’s reputation was that is was a dirty place where citizens needed improved hygiene and more rationally constructed homes.  The Social Democratic government had a plan to enlighten citizens and build ‘The people’s home’.  In less than 50 years, Sweden went from being poor and isolated to a strong, egalitarian society with better living conditions and broad social reforms for all.

IKEA stands for Ingvar Kamprad (founder) Elmtaryd Agunnaryd (founder’s hometown).  Ingvar’s first profits were from selling matchboxes at age 6.  He started his first business, IKEA, in 1943.  He passed away this year, in January of 2018.  He said the only way he’d have a picture of himself posted in the museum was if it was made up of all the workers and staff of his company.

His first sales at age 6

When you look up close, this picture is a collage of the staff at Ikea.

The current exhibition was called “Hacked” and featured Ikea products that had been transformed into art, and other non-household items. 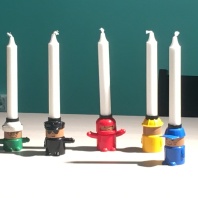 We had too much fun posing for the ‘front cover’ of the upcoming Ikea catalog towards closing time.  But it’s also worth a mention that throughout the entire museum visit, Polly would sporadically shout ‘meatballs!’ letting us know the grand finale would actually be a dinner in the Ikea cafe with your pick of traditional Swedish, chicken, Greek, Italian, or salmon meatballs.

We said our goodbyes early on Sunday morning as Sue and Ken left to catch their flight to The Netherlands.  Finley colored some anniversary gift pictures for his parents, while Kelly and Brian plotted a day trip out to Tylosand, a new town not yet explored.

Finley shares his ‘happy anniversary’ drawings with his folks.

Tylosand! Look at those clouds

The drive was green- through a mix of countryside and cows to tall wooden groves.  Brian shared that about 70% of Sweden is still wild and natural.  We arrived at a crisp and windy beach but with the sun shining, it was perfect for collecting shells.  We also walked a wooded path right between the great vacation homes and the towering sand dunes. 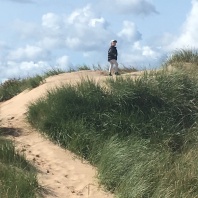 Time for Indian-inspired lunch at a nearby village.  There was no one else in the restaurant, or basically in the shopping area, so we took over the fountain and zocalo before heading to Pippi Longstocking park! 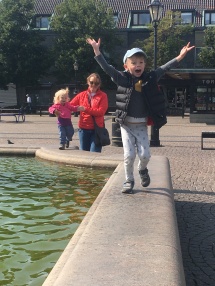 After many attempts, he gets to the top

In Sweden, lost pacifiers at the park are collected and hung from trees like ornaments

We found Pippi at the park 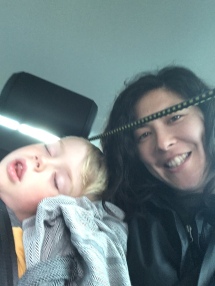 We are tuckered out!

I didn’t think the day’s activities could get any better and then Kelly remembered this picturesque-home-turned-bakery-cafe would be open on Sunday afternoon.  The husband works at the Ikea museum during the week, while his wife does the ordering and upkeep on their site.  After baking all day on Saturday, they only open on Sundays, and how magical it was.  Having a fika, or coffee break with pastries, on the lawn while the kids played was out of a postcard or movie or magazine–something quaint and whimsical.  The cardamom-infused cinnamon rolls are the best I’ve had in Scandinavia!  I felt a tinge of being fifth-wheel awkward as it was Kelly and Brian’s 12th anniversary afternoon, and with the sunlight hitting their kiddos just so, maybe they’d want to be on their own for an hour.  But Kelly reassured me that after so many years together, something so simple and sweet is enough to celebrate, especially with your long-lost cousin helping to make the memory.

After such a sweet final Sunday, I dropped Finley and Polly at school Monday morning before Brian drove me to the train station. I spent the rainy day on my own in Copenhagen, wandering the streets to find a cafe with some time for journaling about my trip.

Neat playground with gym facility inside the building on the right 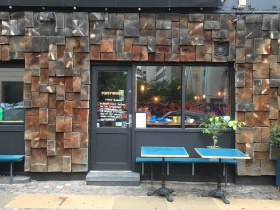 I liked the facade of this restaurant

Artistic benches and chairs throughout the city

Street art 2- beyond the rubble

I also attempted to find the Fredericksburg Palace, which ended up being incredibly anti-climatic as it looked more like a hotel atop a hill than a grand palace.  The gardens surrounding were beautiful though, even as the rain came down harder. 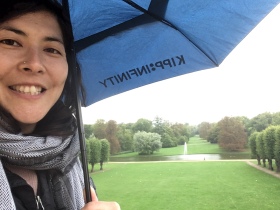 Yep, thanks to Peter I can rep Infinity rain or shine!

Le sigh in the surrounding gardens

I made the decision to head to the airport early to get warm and dry before my flight, and it didn’t hurt that they have a slew of shops to keep me busy for an extra hour.  A bank holiday well spent (and this guy got the bonus cardamom-infused cinnamon pastry from the little bakery in Sweden when he returned back to London after his weeklong work trip to the States).