A Cold Day Trip to Colchester

Elephants have been my favourite animal since I was about eight years old so I was taken with Colchester’s love for the keystone species as well!  We arrived knowing that Colchester is Britain’s oldest recorded town, but didn’t know that when the Roman Emperor Claudius invaded the settlement in 43AD that he brought elephants along to intimidate the locals.  Today you can see small elephants decorating the street signs & placards near the town centre, and the local zoo is said to have some friendly ambassadors as well. 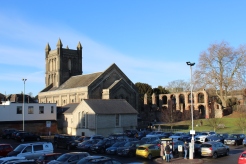 From the Colchester Town train platform

St. Botolph’s Priory is directly behind Colchester Town station.  It was founded in 1100 and was the first Augustinian priory in England.  I had to look up priory (a small nunnery or monastery) and Augustinian (relating to a religious order observing a rule derived from St Augustine’s writings…I admittedly didn’t go deeper than this so I’m still not quite sure of the importance in a specific religion).  The walls that remain are from the 12th century which is just a tad bit older than our country 😉 I thought the arches were stunning.

Leading to the priory 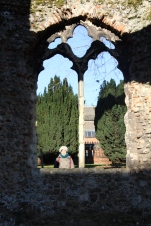 I’m standing on a steep hill so I couldn’t get any closer to the wall! 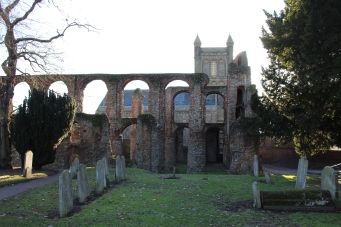 Most people seemed to be using the priory grounds as a shortcut to get to the train station.  We walked against the grain of pedestrians about five minutes up Queen street to Castle Park.   It’s the equivalent of the central park of the area, and many families were visiting this Saturday. I do think there were more children around the back of the castle at the tiny Christmas fair than enjoying the historical site itself.  We weren’t much better than the seven-year olds as we dropped coins into the entrance’s well , but didn’t pay the fee to go beyond the foyer. 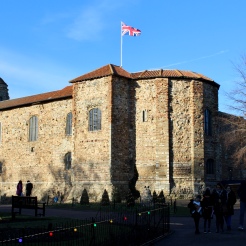 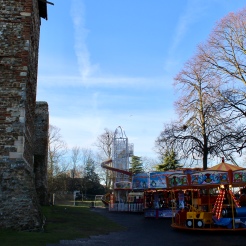 Ice luge! Extreme things going on behind the castle walls

The lady at the castle till offered up a few lunch spots, including Tymperleys on Trinity Street.  It’s a beautiful Tudor building with a pretty garden outside.  We were hungry enough for a full lunch, but they also offer afternoon tea as well.  Their mulled wine was the first I had of the holiday season but it won’t be the last!

Meeting for Worship anyone?

How is this lovely building a post office? I love seeing this mix in British towns.

Garden welcoming us to lunch at Tymperleys!

The brick on this Tudor was beautiful

After seeing the historical sights, and having a cosy lunch, we spent the rest of the chilly afternoon strolling past the Trinity Street shops.  There were many commercial stores like Primark and H&M, but we noted that barber shops and tattoo parlors also made a strong showing.  These brought up the stereotypical images of Essex men from the TV show ‘The Only Way Is Essex (TOWIE)’ — similar to our reality series ‘The Jersey Shore’.

Around 3:30pm, the sun started to fade so we turned up our collars and walked for twenty minutes from Trinity Street to Colchester station.  It’s easy to see why commuters do this route during the week– getting back into Liverpool Street station takes about a hour so it’s an direct and easy day trip to and from London! 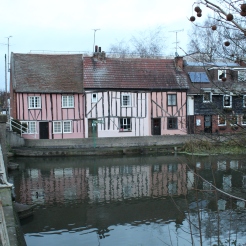 One response to “A Cold Day Trip to Colchester”