The Tale of Tignes

It was worth a full day of travel on either end to have two amazing days of snowboarding in the French Alps.  With a flight into Geneva and a full day of riding the bus up to the resort, we busied ourselves with podcasts, naps, and the Heads Up app.  Our hotel, Le Paquis, was a ten minute walk from the Tignes Le Lac bus depot and was smack in the middle of the ski resort!  The decor of Le Paquis was that light wood paneling found in many cabins, accented with red plaid, hearts and fake furry rugs.  It almost felt like I was staying inside of a Swiss cuckoo clock 🙂 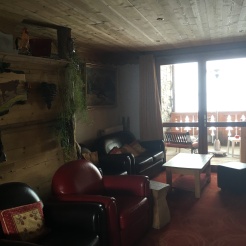 The breakfast on Sunday morning reminded me that I was indeed in France.  The bread basket was filled with mini croissants, baguette and wheat rolls- all deliciously warm and toasted.  We also boiled our own eggs in what looked like a deep fryer, and had sides of sausage, bacon and apple compote aka applesauce.  This applesauce would really get you up and smiling in the morning. So good!

By 9.30am we rode the Parafour lift up to our first run of the day.  The sun was already out and the snow was gleaming!  The slopes were surrounded by sharp tipped mountains and sweeping valleys.  We could see the tracks of off-piste skiers and cross country mavericks in these fields of white. I learned that piste means slope. 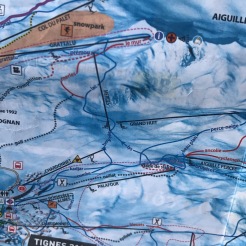 We got our bearings after the first few rides, sticking mainly to blue runs as the two levels above (red and black) were full of moguls.  There were pretty wide runs for the most part and the snow was great, not slushy or overly powdery, and no ice in sight.  My feet and calves felt sore on the flat straightaways but nothing unusual in that.  My goggles were worn down to the plastic so we did need to break for a new pair.  I guess the padding had been doing its job since 2004!

After I was able to see again, we made our way over to Val d’Isere to do some runs at this second resort.  It was easy to buy a lift ticket that allowed us to ski both sides of the mountain– just six Euro more to access Tignes and Val d’Isere.  I enjoyed the variety of ways to travel from slope to slope: lifts, funiculars, gondolas, and pulleys!  At 3:45pm it was time to meet up for the infamous apres-ski experience at La Folle Douche!  If you are imagining a warm lodge to grab a beer at the end of a long day, erase that image now.  This was a serious mid-mountain dance party.  People are are having beer but there is also a full on performance by go-go dancers, an arial artist, and a crowd that is dancing on the tables in teetering ski boots!  At one point, champagne was sprayed across the crowd and the hype-man of the festivities skipped around the tables grinding on as many people as possible.  If you’re wondering, yes, you do board/ski down the mountain after these shenanigans. 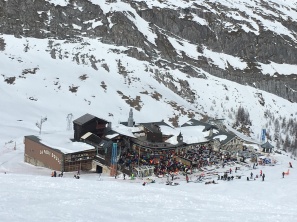 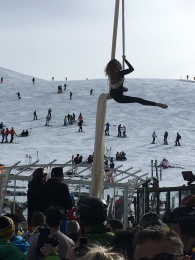 Madler, Jeremy, Danga, and Castro booked an amazing chalet in Val d’Isere, complete with a ‘butler’ who cooked breakfast and dinner!  The ‘butler’ was really a young kid in his gap year after Uni.  The chalet also had a fireplace that was the perfect setting to drink wine and play rounds of Jenga.  Of course, an impromptu competition started called ‘who could start the best fire’.  Madler and crew generously offered for us to have dinner at theirs which was so nice after a long day.

Finding our way back to Tigne Le Lac proved a bit tricky at 10pm as there weren’t buses running at that time, and the first two cab companies were closed. Corey finally got in touch with a company that sent a large van.  While we were loading our boards, an English gentleman came running up to ask if we were heading to Tignes?  We ended up with nine blokes in a six seater van riding back on the winding mountains talking politics and US/UK comparisons the entire time.  They also paid for our ride as well which we realized would have been a hefty price for just two of us.

The second day of snowboarding always reminds you that you have muscles you never knew existed.  We still felt energized and excited for another great day on the pistes, especially since Madler, Jeremy, and Castro would come to our side of the mountain for the day.  We had a great time in Tignes Le Lac showing them our favorite runs from the day before.  For lunch, the crew loaded up on seriously gourmet burgers and a plate of lasagna!  I was content with a granola bar as I get too heavy and then can’t finish the day.

View from our lunch place on the slopes.

We headed to do some runs back on their side of the mountain before round two of apres-ski.  At the end of a long day, zigzagging down the piste with little jumps, Corey took his infamous spill, actually knocking the wind out of him.  I think, like many adults, it takes us longer to get up from a fall since we’re just not accustomed to falling like that in our day to day 🙂 No one thought anything of this fall compared to his others…so after a quick rest, we skied down as usual.  (Madler did get the whole thing on his go-pro if you’re interested in the video, but it’s a bit long to post here.)

At the bottom of the run, the group split up and I went back up with two other guys while the rest of the group headed to Coco Rico for apres-ski.  The last run of my day was taking the funicular up and down the face of the mountain.  The goal was for Joe, Jimmy and I to board down the longest blue into Coco Rico, but it was closed when we got to the top of the mountain!!!  This meant that we’d be re-routing down red and black runs on the face of the mountain at the end of the day!  Needless to say, we could only laugh when we’d fall, slide down half the run, and takes out most of the moguls on a singular piste.  I’m sure the skiers were looking at us sideways. Moguls are not made for snowboarders in my opinion.

We definitely earned our beers by the time we slid into the bar, live music blasting and friends singing along.  Corey looked rough.  That last fall of the day was taking a toll.  He didn’t finish his beer and was in the bathroom for 20 minutes. Apparently, he didn’t even need to go, but he just wanted to sit down.  At this point, it was time to go back to our hotel.  Madler helped carry his board to the bus, and I carried both to the hotel after a rocky bus ride (he threw up twice).  He self-diagnosed his injury as bruised or cracked ribs which you can’t actually do anything about. I got the emergency number from the hotel just in case, and bought some paracetamol (Tylenol in Europe) before the local pharmacy closed.  He was in so much pain that he didn’t sleep that night, but wanted to brave traveling back to London and then deal with it all then.

Snowboarding in the Alps was incredible and I felt so lucky to go in my time out here.  However, the next part of the story isn’t fun at all.   Corey, after refusing to go to the doctor for three days, finally went to the GP after I pointed out that his symptoms seemed to be pretty intense: not being able to go to the bathroom, zero appetite, not sleeping for longer than 1.5 hours at a time, and a few other things that he can share on his own if you ask.

The GP immediately directed him to the A&E (emergency room) where, after a day of tests, the doctors found that Corey had lacerated his left kidney in at least 2 places -1cm each.  He had a subcapsular hematoma (a blood clot) around his left kidney that was compressing his kidney to 3cm (a normal kidney is about 10 cm). He was transferred to two other hospitals for more specific and urgent care.

Look at the image on the right side with the large pouch shape. That’s the clot around his kidney.

Overall Corey was in good spirits each day

Corey’s first roommate, Joe the Irishman with super blue eyes. He sang Irish tunes on St Patty’s day! It was too cute.

After a week in the hospital, you’re probably not surprised to hear that he’d made friends with the entire staff at the Royal Free Hospital. Sometimes I’d return from work while nurses were running tests to determine if he’d need a stent or surgery or just bedrest, and sometimes the nurses would just drop by for a chat, or to tell him that they were leaving for the evening.

He had a series of doctors visiting every day.

Looking good after getting some hospital food energy. He was barely eating half of the meals actually.

No sleep spells was sleeping more than I’d ever seen.

Being transferred to the Royal Free Hospital.

Corey and our ambulance driver hit it off talking about boxing and futbol.

I felt lucky to stay with him as our private healthcare offered a cot for relatives so I could come and go from work, and stay with him in the evenings.  Friends from work visited, we facetimed our family, and he even received bouquets of flowers.

How Cspells spent most of his days. 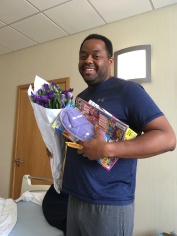 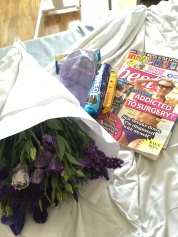 What more could you need?

We’re still monitoring his blood pressure at home, and I haven’t seen him sleep so much in the decade that I’ve known him, but ultimately he’s healing and he shouldn’t have any loss of function in his kidney by the time his clot dissolves in another month.

The loveliest flowers from BBG.

He’s done! Breakin out of the bracelet was big 🙂

Appetite is back! Zaffrani had to be the first meal back.

He loves to tell the story so definitely ask him how he’s doing, and thank you to everyone who has reached out with their love and support while he’s been healing and getting back to his old self.

One response to “The Tale of Tignes”