The Hoi An River Town Hotel welcomed us with coconut crackers, a map, and an enthusiastic staff member named Thu.  She provided suggestions for local food spots before we went into town.  The lantern-lit streets felt luring compared to the claustrophobic market stalls of Siem Reap.  Hoi An had a small town feeling, like being somewhere that you’d definitely walk into people more than once. It’s center is full of artists, garment makers, cafes and dimly lit restaurants.  Along the riverside, people are buying paper lanterns to launch into the river for a lucky wish.  While the open air store fronts were still full of signaling vendors, we felt like we could stroll along without being bothered much by the other visitors and hawkers.

We ate at a popular restaurant called Morning Glory- so popular, in fact, that the illustrious vegetable was sold out by 7pm.  The squid stuffed with pork, and the bahn xeo (an egg pancake or crepe) were the best plates of the evening.  Then we spent the remainder of the night wandering streets full of tailor shops, all promising they could make any size, color or style clothing we desired by the following evening.  Even the shoe shops said they could make sandals and sneakers for us if we didn’t see our size on the floor.  We ended up taking the bait at Peace Tailor and Bari Tailor, and fashion designing ensued.  Peace Tailor had nice options for Corey while Bari had better fabrics for women.  Corey started the rumpus with three suits that night!

Welcome to Hoi An 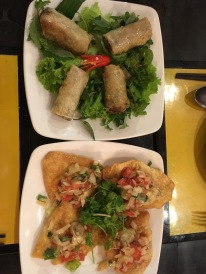 Morning Glory restaurant: the start of our spring roll gluttony and crab wontons 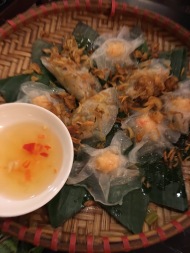 We started our morning with the international buffet at the hotel.  I liked how the omelet station was also serving up steaming bowls of pho.  Our guide, Mr. Le Xuan Thong, promptly picked us up at 9am for our tour of My Son temple.  The temple site itself was small and not nearly as grand as Angkor Wat, but Mr. Thong was such an excellent guide that we felt our time was really well spent at the ruins.

After a short trolly ride, we arrived at the site in time to see a dance and musical performance.  Mr. Thong shared that the site was built in the 9th century by the Cham people who migrated from India.  Much of the site has actually been renovated and rebuilt by French and German teams after the vast bombing that this area experienced during the Vietnam War.  There were large craters in the ground where mines had exploded as well.  We were warned not to go off the trail as live mines still litter the jungle. 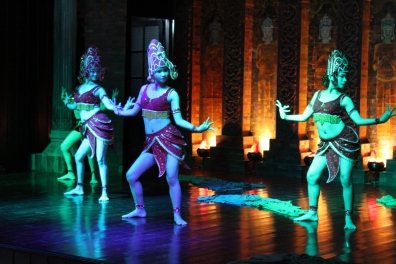 Visitors were welcomed with a traditional Vietnamese dance performance.

This lute player could hold his breath forever it seemed. 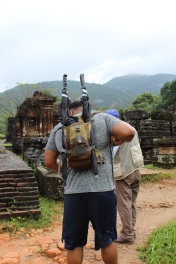 We were prepared for rainy weather.

The linga is a Hindu symbol representing energy and fertility. These were all over temples in Vietnam. 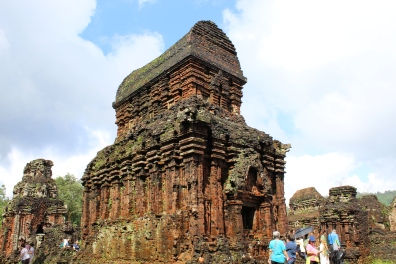 Ancient sanskrit writing tells us this temple was influence by the Cham people from India. 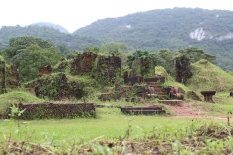 A part of My Son that hasn’t been rebuilt.

Three faces to guard the temple

A crater formed from a land mine. The My Son area was heavily bombed during the Vietnam war, and visitors are encouraged to stay on the marked paths as active mines are still in the area.

We had a local lunch with Mr. Thong and Mr. Vu (our driver).  The noodle salad was crisp and savory and spicy all at the same time. You should also note that the papadum looking rounds (center picture) were yummy with salad, but if you didn’t eat your round, it was put back into the pile to serve upcoming guests (we found this out afterwards). 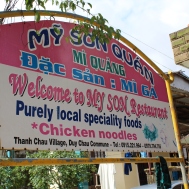 These crisps were similar to papadums. If you don’t eat your entire plate, they’ll just pile on more and serve these to the next guests. 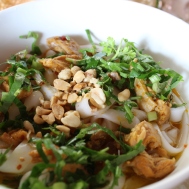 We took a bike ride to An Bang beach about thirty minutes away from the town center.  Riding along the ride paddies was beautiful and the beach wasn’t too crowded as it was an overcast day. 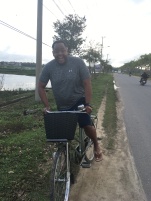 Corey was taking video while riding his bike!

Round boats apparently don’t get taxed in the same way as long boats. These round boats are also used for local racing at times. 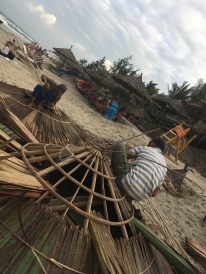 Repairs on the beach huts. 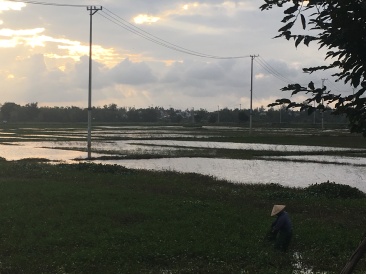 Rice paddies and the conical hat: we learned the hat is waterproof and mainly worn by women. That didn’t stop Corey for buying a conical hat in the market this same night.

We continued our bike ride to Cam Nam Island where we stopped for a snack.  The soup stall caught my eye because of how many people were out front.  Once we sat down, however, we realized it was really just one large group of school girls who were eating together.  The owners, and the girls, were laughing so hard as Corey went to squat onto the small plastic stools next to their table (you’ll smile at the pictures below).  This immediately prompted a selfie moment and we enjoyed eating at this stand because more and more families were bringing their little ones for dinner.

We dropped off our bikes, went back to our tailor shops for final fittings, and then tried Bale Well for dinner.  It’s a spot with a fixed menu of kebabs and wraps.  The staff brought everything to the table, feverishly made a sample roll, and then stuffed one into Corey’s mouth.  Then they stood to watch ‘barangs’ (foreigners) try to make their own rolls while giving directions and pointers.  We ate with two women traveling from Israel and another from Chile who shared their backpacking stories.

Soup snack from a literal mom and pop stall.

School is out and friends are sharing a bowl of soup. Insert Corey 🙂

This boy kept watching Corey take down his bowl of soup so I had to get a shot of them dining together.

Bale Well staff models how to make a wrap and then feeds you your first bite!

There is only one set menu. Be ready to eat! 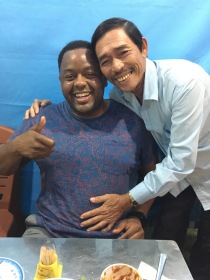 I heard a bit of Japanese walking through the Hoi An lanes and we came upon a Japanese language class for kids.

With nothing officially planned for today, we started off with a walk around the neighborhood.  We strolled through markets, shoe shops, and quiet residential areas. 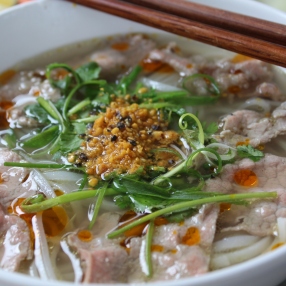 Pho for breakfast. We showed up at 10am and the woman was confused about what we wanted so ‘late’ in the day! Most people were up by 5:30am having pho. 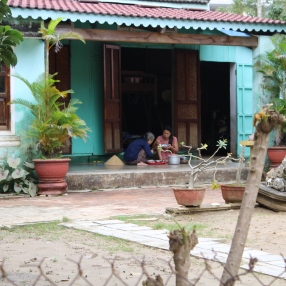 Taking a stroll in Hoi An, off the touristic lanes. 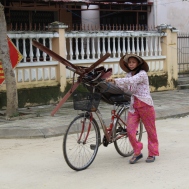 Everything can be transported on a bike in this country. 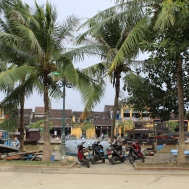 I believe this was an oar to a boat on the river? 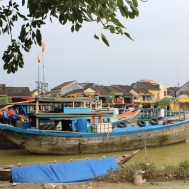 River boats in Hoi An

Everyone wanted to welcome Corey to their country. More pics to come on Corey being embraced by locals and tourists alike.

Time for a snack after so much walking! Coconut crackers, white rose dumplings, and coffee- not all from the same cafe.  We basically stopped for a taste of anything from the street vendors that looked tasty.  For lunch, we waited in line for bahn my/mi from a place that our hotel suggested.  We figured it must be good if there was a line out the door.  Once we saw the menu we realized why the line was so long- the restaurant had been crowned by Anthony Bourdain. 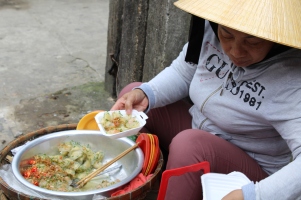 Hoi An working on its international flair. 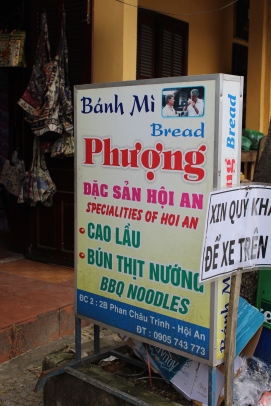 Our first bahn my/mi in Vietnam!

We didn’t know that Anthony Bourdain had crowned this place! 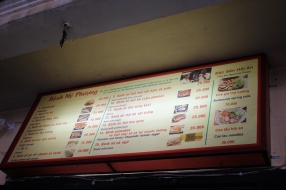 We captured more moments in the center of town- baguette shops and an art shop and a sleeping stall owner.  We also got caught up in school dismissal. 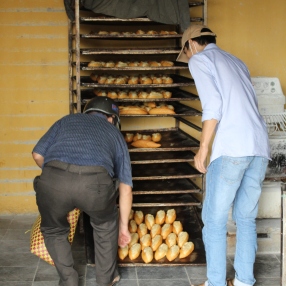 Bung bung! This gentleman was taken with Corey, and patted his stomach, commenting that they had the same ‘bung belly’. We bought two watercolor paintings from him.

Siesta time for this vendor.

As it was our last night, we tried our luck at Morning Glory again, but still failed to have a dish of morning glory.  I think Ms. Vy, the restauranteur, has singlehandedly raised the status of the ivy-looking veggie at all four of her restaurants.  We strolled home and relaxed with beers in the hotel courtyard.

It was hard to believe that we’d already finished this leg of the trip.  Hoi An was a delightful first stop in Vietnam, and a wonderful introduction for our ten day stint here.

Day 1- Arrival in the afternoon