Our full day adventure at the Temples of Angkor started at 4:30am.  Mr. Paul, our quiet driver with a warm smile, offered us water and towelettes as we loaded ourselves into the tuktuk.  He had a never-ending supply of these two items and he offered them each time we moved onto our next landmark.  Soriya, our wonderful tour guide, helped us purchase our one day pass amongst the droves of tourists lining up to enter the park.  It did ring true that sunrise at Angkor Wat temple was a bit like Disneyland.  But seeing the temple with its reflection in a lotus pond was breathtaking.

Stand in the correct line for the pass you want to buy: $20 for a 1 day pass

Angkor Wat during a cloudy sunrise

Ready for the day

Tuktuk drivers ‘tuked’ in waiting for their guests

We snuck off before the crowds dispersed to get a head start at Bayon Temple in Angkor Thom (which means ‘big city’).  We had full access to the temple without a soul in sight. The temple is know of its many faces smiling at visitors at every turn.  Soriya directed us to the best points in the temple for kodak moments.  This was my favorite temple in the city walls. 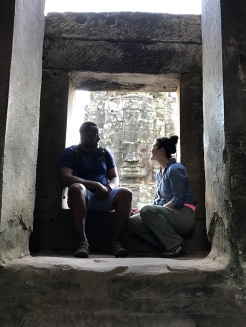 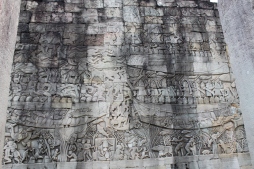 Corey and Soriya, our guide. He lost most of his aunties and uncle sin the Civil War but his parents survived as well as his grandparents. Now he uses his tour guide time to educate tourists about the Khmer Rouge and the country’s more recent history.

Our itinerary stated we should return to the hotel for breakfast by 8am, but we asked Soriya to take us to a local restaurant instead where I had the best sour chicken soup of my life.  Corey had fish amok, a curried fish served in a hollowed-out coconut.  Soriya’s suggestion was a wonderful way to fuel ourselves up for the remainder of the day. 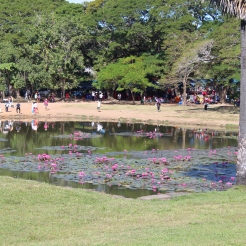 The lotus pond in front of Angkor Wat (reflection pool)

Soriya and Corey reflecting on the architecture from the 9th century

It was only 8:30am by the time we were on our way back to Angkor Wat temple.  However, the sun made it feel like it was high noon so we took our time heading into the main temple site.  We huddled under the minimal shade on the site while Soriya narrated our visit with the 9th -11th century history of the Khmer Empire.  We learned that Angkor Wat was actually a funeral temple so its entrance faces West instead of East.  The temple was built in the same year as Notre Dame in Paris.  Similarly to our visit to Notre Dame, we opted out of waiting in the long time to climb to the top of the temple.  Soriya told us that the temple was built in a mere thirty-five years with nearly 400 elephants pulling stones through the jungle, and close to 30,000 slaves working on the temple grounds.  The Angkor plaza was a city with one million inhabitants during the height of the Khmer Empire. 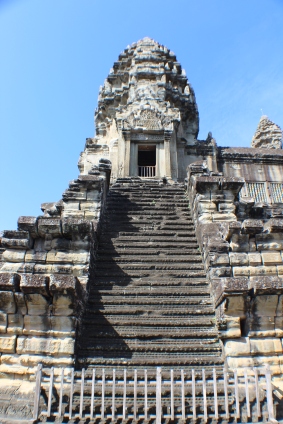 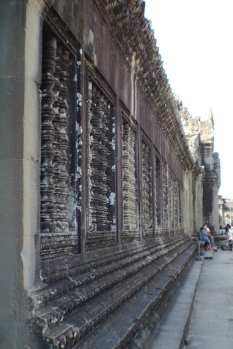 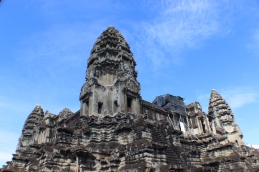 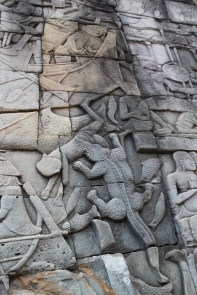 The temple, like many others, reflect the Buddhist tradition of odd numbers being lucky.  Areas within the temple would highlight three or five columns rather than an even number of pillars.  We walked past an ancient library site, pounded our chests in the echo chamber, and came out on the other side of Angkor Wat to see a smaller ruins inhabited by monkeys.  Mr. Paul waited with cool towelettes and water when we came out of the other side of the temple, which we gladly welcomed at this point, being covered in dust and sunblock.

Our next stop: Angkor Ta Prohm (The Jungle Temple)

Like most of the other temples on site, this one was also abandoned for 500 years after the Khmer fell under attack.  At Angkor Ta Prohm, the trees have grown over the stones for centuries, displaying an incredible scene where the natural vegetation and the ancient architecture are in a seamless bind.

This was Corey’s favorite temple, and this site might look familiar to you as it’s featured in the movie Tomb Raider. 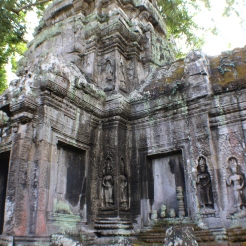 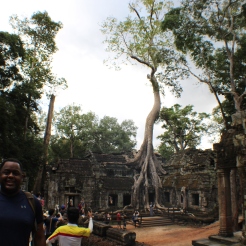 Next Stop: A Climbing Temple (we can’t find the exact name online)

We were able to climb up to the top of this temple, but once at the top, we understood by our guide had decided to stay below.  There wasn’t much to see at the look out, and it was pretty warm.  Honestly, at this point, we had a bit of temple fatigue.  We opted to drive off the Angkor plaza for lunch (out of the East gate), passing the royal grounds where Lunar New Year and large celebrations are still held today.

From the royal grounds 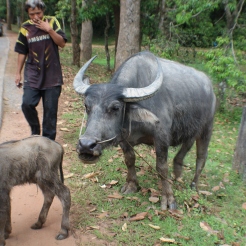 A baby water buffalo wanted to check us out. Mom said ‘Don’t talk to strangers’ 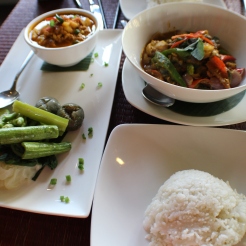 We had lunch at the Chanery Tree, a locally owned restaurant, but one that very much catered to Western guests.  After curries of fermented pork and lake fish from Tonle Sap, Corey and I piled back into the tuktuk from either side and completely banged our heads into one another. Mr. Paul did everything he could to stop giggling at us, but we all lost it.

We visited an artisan school and saw many 20-something year olds working, carving, laquering, and painting various types of wood, sandstone, soapstone, and textiles.

Here is the process that a piece will go through in sculpture class. 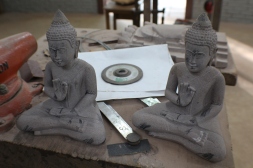 The marks are the places where pupils need to go back and make revisions.

Corey tries to chip away.

We skipped heading back to Angkor Wat for the sunset as it was still a cloudy day.  Instead, we tried to head out to a silk farm, but we missed the last entry by about fifteen minutes.  Soriya was very troubled by this but it was worth the trek out there just to hear more about his family and how the civil war has impacted the city, the tourism industry, and the mindsets of generations of people.

After saying farewell to our guides, we went to the Old Market.  This is the most touristic part of the city, with relentless vendors and densely packed stalls overflowing with the identical souvenirs.  It felt like we were wandering Cambodian ‘souks’ full of elephant pants, smoothies, scarves, keychains and knockoff Nikes.  There were also stalls of skewered ‘creepy crawlies’, daring tourists to try scorpion, rat, snake and tarantula.  For dinner, we opted instead for mama noodle stirfry and two beers for a grand total of $3.50.  We wandered into a spot advertising ‘classic hip hop’ and were blasted with pop songs and an entourage of under-18 youth.  The music was deafening  so we took our ‘old’ selves back to our hotel and called it a night at the hotel bar. 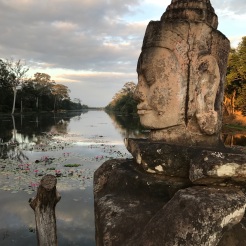 We had a late morning check out at our hotel.  The Le Meridien hotel actually has wonderful food so our laab salad with fried rice and eggs was a very lovely last meal in Siem Reap.  We chatted with two families at the airport, one Australian family of teachers who were traveling with ukuleles to play at local schools.  The other a single mom with two kids from Minneapolis.  The mom, a public defender, and the daughter toting a handful of books that would put my at-home library to shame.  The son keeping pace with Corey in video games and Trump’s election.  Our flight to Vietnam would take two hours, and we’d arrive in Danang, immediately in search of white rose dumplings, bahn xeo and freshly brewed beer (which we learned later not to drink as it may not be made with filtered water). 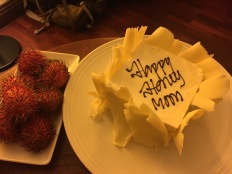