When you rent a car, it’s a common thing to adjust your mirrors and to set up whatever GPS device you’ll use for your road trip. You adjust the driver’s seat to reach the brake and gas pedals, and you reach to the left to put on your seatbelt…or wait, to the right, because you’re in a British car.  I started laughing out loud as Corey was plugging his phone into the car’s charger.

“What? I just wanna make sure we’re all charged for the trip.” He protested.

“That’s totally fine.  I am just laughing at myself because I don’t even know which way to pull out of this spot, and we’re only in the parking lot.”

We sheepishly sat in the car to wait for another driver to pull out so that we could copy cat their moves.  I knew that our relaxing Lake District camping trip would start off a little shaky because driving in Leeds would mean traffic on a Friday afternoon. Corey did a great job of calming my nerves by navigating and by checking all my mirrors with me whenever I needed to merge.  He encouraged me to drive as slowly as I needed to in order to get comfortable. He also had to tell me a few times that I was too close to the shoulder because I really wasn’t used to the entire side of our car being to my left!  After the first 90 minutes, the city buildings disappeared, and the rolling green hills, and small country roads helped me to loosen my grip on the steering wheel.

Since the sun had been setting at 10:30pm in July, we thought we had a good chance to get to Wasdale campground before we lost light.  This prompted a quick Burger King dinner and a very efficient pitstop for gas, but alas, we just missed the deadline.  So that five pound lantern I purchased didn’t really extend its light beyond the length of a tent pole, and we had a new tent as well, so pitching the tent close to midnight was a hilarious series of errors– but a good challenge for newlyweds, right? 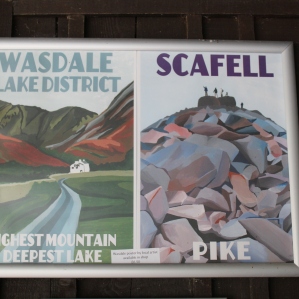 We woke up in a valley with beautiful green mountains around us, and our tent hadn’t caved in!  Good work, team!  We ate yogurt and granola out of the trunk of our rental car because there were not picnic tables at the campground. We then proceeded to the ranger station to get directions for a hike up Scafell Pike, the highest peak in England.  The ranger took one look at our open-toed Tevas and mesh shorts, and suggested a flatter trek with a pub round the end of the trail.  The Mosedale walk would be better suited for us because the weather changes so quickly at the top of the peak that we wouldn’t be prepared with our ‘gear’.  But don’t worry, she wasn’t insulting us with the comment about the pub.  Before we left for the Lake district, Corey and I had many colleagues tell us that the whole point of hiking was to have a pub roast and a pint at the end of the day.  Isn’t it obvious that this is far superior to roasting marshmallows, you silly Americans?!  Plus, open fire pits aren’t really allowed in campsites that are covered with grass.  Since we didn’t invest in a camp stove, table, or chairs, it also seemed like a logical choice to jump aboard the ‘pub camping’ train.

Hiking through the Lake district in the Cumbria region felt like being on a Settlers of Catan board.  There were rolling green hills dotted with sheep.  The ore would pop up out of the hillside and there were also fences built as barriers for each pasture.  It was unlike any place I’ve hiked before.  I’ve also never had to use a map so frequently but as there were very few trail markers, we stopped a lot to check our location.  It was neat that our map was printed on waterproof paper, and it was funny when the bits of map used words unfamiliar to us. What is a ‘cairn’ or a ‘dale’? 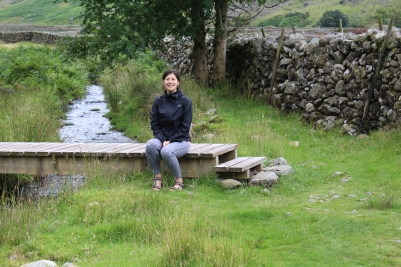 Along our trail, we saw one of England’s smallest churches, the Church of St. Olaf, numerous sheep, and two amazing mountain bikers coming down the trail.  We ended up at Ritson’s Bar with two pints, a lamb stew, and a chicken burger.  You really do feel you’ve earned a hearty meal with you see all of the other hikers and backpackers finishing off pints after a long day out– it’s a community experience. 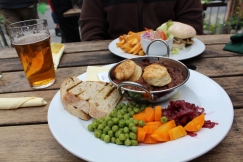 On the fifteen minute walk back to our site, we planned the rest of our evening:

We were introduced to midges- a small gnat that bites like a mosquito.  This proved a problem for staying out late on our blanket to see the stars, but I think we were both keen to be asleep anyways after a full day of hiking.

Sunday, we opted for a hike to a small lake, the Burnmoor Tarn loop.  It was another gorgeous day.  This hike was only a four miler, but let’s remember that there were very few trail markers, so that short hike turned into a full morning trek as Tamiko led Corey straight up a hill for about an hour in the wrong direction.  Corey insisted that the directions on the map, ‘A long steady climb which is never too steep, ‘ probably meant that we needed to make a left at some point to get off of the huge hill we were climbing.  But I insisted that we still hadn’t come to the ‘edge of the fence wood’ (also printed on the map).  Once we got to the top of the hill, we could really see how far past the fence wood we’d gone, and how far back we’d need to go to get to the lake. 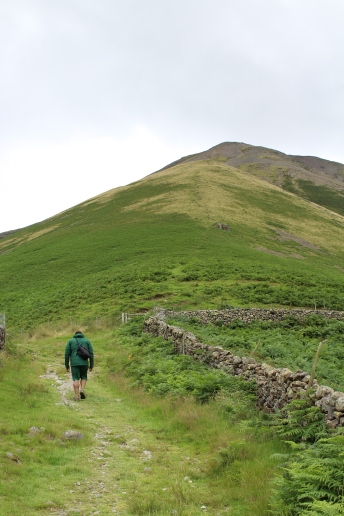 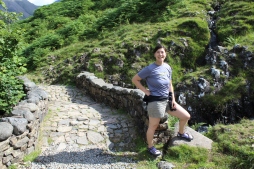 Making our way to Burnmoor, we sunk into boggy areas in our Tevas, and spent this last leg of the journey reminiscing about our big weekend in California.  Just reliving the moments with our family and friends was enough to ignore the mushy mud between our toes. 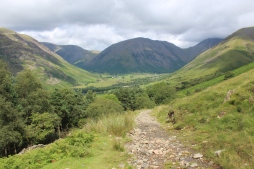 This is apparently the old school energy bar- just a load of sugar with a minty flavor. 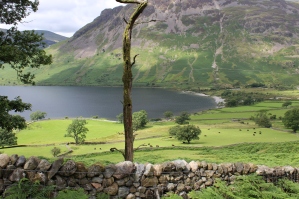 This night being our last, we committed to driving to two recommended pubs about twenty minutes down the road.  We decided to do a Sunday roast for the first round, and then to do an afternoon hike on a trail close to the second pub.  The second hike was a series of walking paths looping around neighboring campsites.  I know we didn’t earn another full meal with that short walk after the roast but we wanted to try a plate of cumbria sausages since they were specialities of the region.  We split a plate of bangers and mash for an early dinner.  We also played a variety of random board games that had been well-loved in their previous lives: Snakes & Ladders, Mastermind, and some game where you had to answers trivia questions to prove how well you knew the other members on your team.  It was a riot to play as newlyweds and to commemorate our decade of knowing one another. 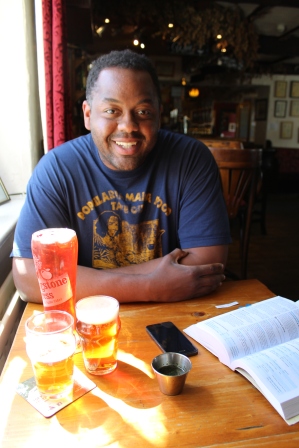 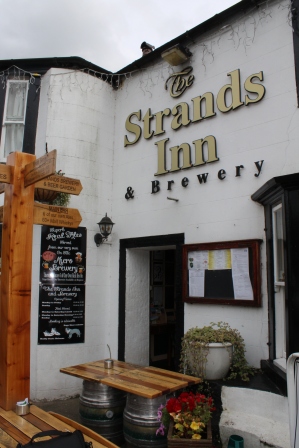 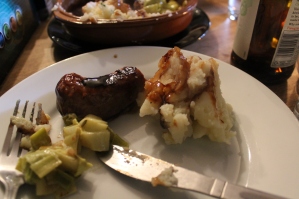