(Part 2 with Corey D) Arriving at Montparnasse station on Saturday morning was strange because I actually recognized the market that ran just alongside the station’s exit.  This was the infamous set of stalls where a pigeon flew into my hair while my mom was eyeing leather backpacks.  She couldn’t stop laughing about the bird mistaking my messy bun for a nest.

We strolled past purplish -green artichokes and milky white mushroom caps.  The leafy greens and the heirloom tomatoes were also beautiful in the sunlight.  The twenty minute walk to the airbnb was quiet and shaded with trees.  Our host was an avid comic fan.   His posters were of superheroes and of the most recent Marvel movies released in the States. Corey D. finished walking Champs Elysee in perfect time to meet up for crepes with our friends, Rich and Sam. It was at this time that Sam let us know that crepes weren’t actually Parisian, but that her neighborhood did have a wealth of creperies to choose from (crepes are originally from Brittany, a region in the northwest of France).  We ended up as La Creperie de Josselin, where I realized I had eaten with my mom just months before during her trip.  It’s interesting to feel like I ‘know’ parts of Paris now.

After lunch, we hit up popular shoe shops for Corey and Rich, and Amorino gelato for Sam.  As a side note, I recently discovered that Amorino has a location right on Upper Street! Corey and I have made rules about how frequently we can visit.

We made our way through the crowded, beer strewn streets to the stadium.  The Euros match between Wales and Northern Ireland was pretty rubbish, but it was so good to catch up with Corey D about his trip, and to have the opportunity to attend such a major event in a city so close to London.

Our group split up after the Euros as Sam and Rich had a birthday party and Corey D still had places to check off on his Parisian sightseeing list.  We made our way to Le Tour Eiffel, and took some prime shots amidst the Euros fans decked out in team gear.  We had dinner at Tracy’s favorite restaurant in Paris, La Coincidence, on a complete whim! We hadn’t booked but arrived early enough to snag a great table.  The meats were very tasty, and we laughed at how our waiter hailed from Miami.  It’s seriously a small world.  Unfortunately, we weren’t able to get Corey D to Sacre Coeur before heading to our next meet up at L’absinthe Cafe.  We met Aisha and Ismoyla for some good ol’ green fairy hangouts for her birthday weekend. I reminisced thinking about how my first understanding of absinthe actually came from Corey D’s older brother, Starlie. I’m sure he’d be proud of us, traveling together in Paris, retracing a few of his footsteps.

Um, we forgot to take a ‘before’ shot. At least you can see how good the food was as our plates are completely clean! 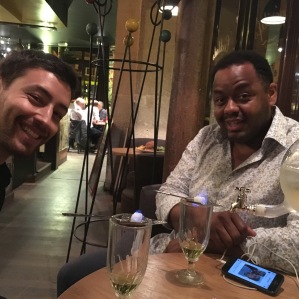 Finding the perfect flow for H2O

Aisha, Ismoyla, Corey D, Corey and I met up with Sam, Rich, her childhood friends, and some Bloomberg blokes who were also in Paris to see the Euros. It’s an amazing feeling to know that we are from so many different places, and had the opportunity to come together in Paris!  I’m embarrassed to say that after so much effort to meet up, I was pretty wiped out. I didn’t last long at the bars, but in an effort to see more of Paris on Corey D’s last night, we walked all the way back to our flat!  We held philosophical debates, discussed gender politics, went on about women’s studies, suffragettes, and the whole lot.  Yep, an evening stroll with two Coreys and myself making the world a better place.  I thoroughly enjoyed our final evening together, and Corey D was gone before we woke up the next morning.  In his place, he left a nice goodbye note complete with “See you for the wedding in 1 week!”

We needed to hit up L’As du Fallafel on Sunday morning as Corey still hadn’t been.  It didn’t disappoint.  I’d get the appetizer sampler as my meal since it’s basically a deconstructed pita with a few additional yummy dips.  Catching the Eurostar home without guests or friends felt…well…quiet, as Corey D’s trip was the final visit before our major trip to California in just a week’s time.  ((What happened that weekend? Well, it was really the start of our journey together for the rest of our lives.  So many memories that we’ll continue to return to as it was a total blast!)) 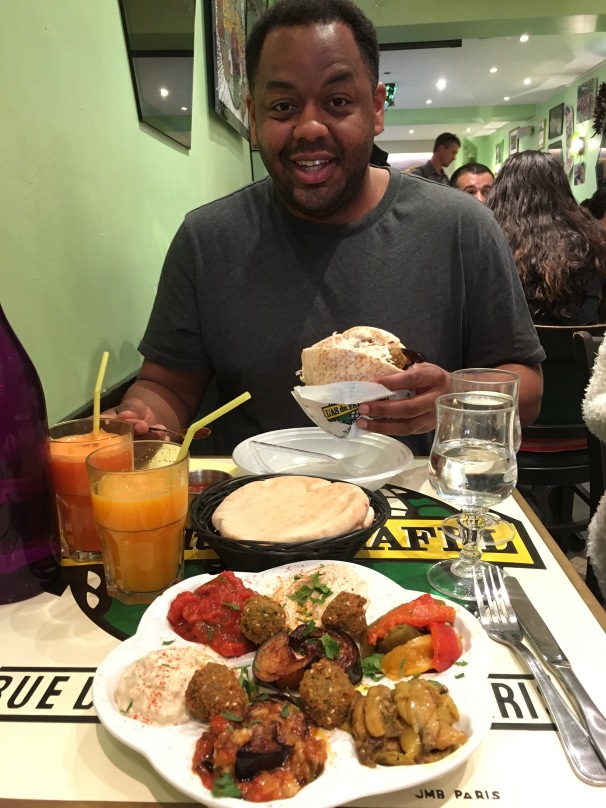 Market near Montparnasse Station (closes by 2pm so visit early)

La Creperie de Josselin (have the cider with your crepe)

Explore Rue Montorgueil and do some shopping in the Marais district

La Coincidence for dinner (book ahead to secure a seat)

L’absinthe Cafe – a fun treat if you’ve never tried absinthe (though this drink didn’t originate in Paris, it was very popular in the community of artists and writers in the late 19th century)

L’As du Fallafel– (closed on Saturdays; fun shopping in this area as well)