We didn’t even need to put away the air mattress as Corey D showed up four days after Alison and Goldberg had returned home!  He was the first guest to use my London Adventures walking guide book, and boy, did he get his walk on all over London.  This included going into many museums and tackling his goal of walking into every room whether it be art, history, photos or artifacts.  You read that correctly- Corey goes into a museum with the mindset that he’ll hit up every single room in the gallery space!

Whenever someone visits London and then wants to do a weekend trip out of the city, my Corey usually suggests Berlin.  I’m never confident that a weekend trip to Berlin will do the city justice, but this time, Corey D said it was high on his list too, so we booked the flights, and had a seriously wonderful time in just 48 hours. 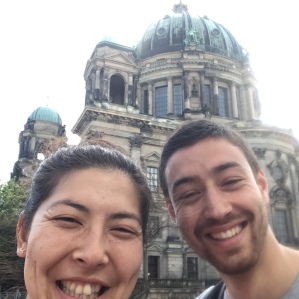 Our first selfie of the trip

We caught a super early flight from Stanstead to arrive in Berlin before lunchtime.  On the train from Schönefeld airport, we noticed how much space there was in the lay out of the city.  The platzs were truly huge plazas soon to be full of locals shopping, dining, and visiting pop up markets.  The subway stations were also very grand in size, and the waterways winding through the city gave it such a relaxing, walkable feel.

We fueled up on Curry36, a currywurst stand directly outside of our train station.  It is really close to the zoo if you’re staying in that area of the city.  Currywurst is a common snack, with stands as frequent as one would find a Dunkin Donuts storefront in NYC.

As we finished our currywurst ‘breakfast’, it started to pour. This made our efforts to find our hotel a bit trickier as we huddled under a tiny umbrella checking the map on my iPhone at each corner.  The plan was to leave our bags, go out, and return once our room was made up.  We changed our damp clothes in the hotel bathroom, and then parked in the hotel lobby to quickly map out our route for the day.  However, our heavy lids got the best of us and we fell asleep awkwardly in the lobby until about 3pm, when I woke up and realized at least our room would be ready! 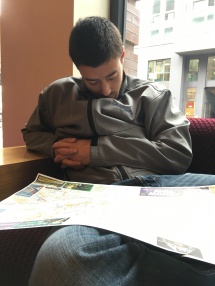 Armed with a Berlin Welcome card, and our map full of circles and scribbles, we took the SBahn (train line) to Alexanderplatz.  This is where the iconic TV tower and the world clock reside.  We sheepishly had another currywurst, and soon began to realize that Curry36 might have been a treasure found in the first hours of our trip.

We walked through the wide streets and smaller plazas to the DDR, a museum completely dedicated to explaining life in East Berlin.  The exhibit was super interactive and hands on for all ages.  An interesting point was learning about how schools prepared students for life as a member in a socialist society.  One strategy that stuck out to me was the concept of the whole classroom potty break.  All children needed to remain on the pot until the last child was finished! 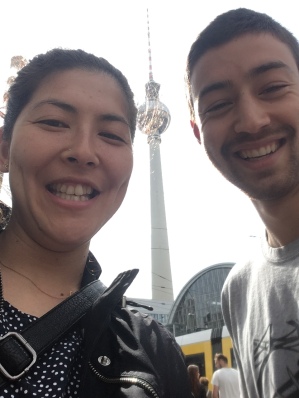 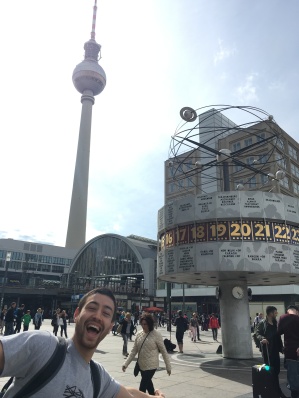 We documented this dish because we wanted to keep track of just how many currywursts we ate, but this one wasn’t nearly as good as the first.

Alexanderplatz walking toward the DDR

The DDR was alongside a beautiful river which we followed to museum island.  This is a top-listed sight in the city, an island that is the home to four museums full of ancient art.  We arrived too late to visit any of them on the first day, but we also agreed that we were more interested in visiting the museums specifically dedicated to the unique history in Berlin rather than seeing some of the ancient art or sculptures living on the island. 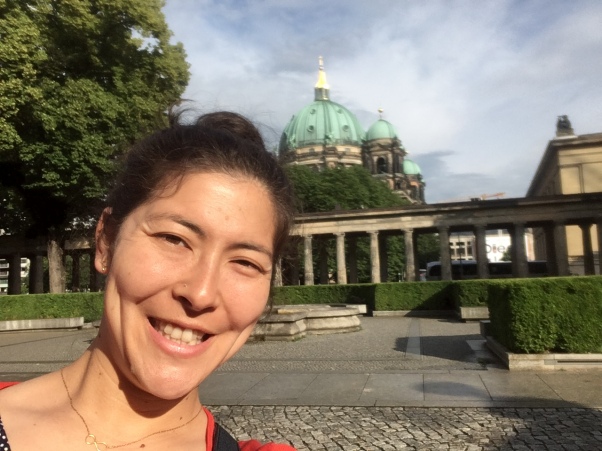 Can’t remember the name this building?!

Our next stop was the Book Burning Memorial in front of the Humbold University building.  To find the memorial in the plaza, you need to look out for a gathering of tourists all staring at the ground.  We made our way to Brandenburg Gate.  For me, the most touching part of this area was the space dedicated to the victims in Orlando.  Our walk also took us to the memorial dedicated to murdered Jews. I guess you could say we saw some pretty cheerless things on our first day, but the entire time, I felt a definite comfort in the fact that Berlin has done an amazing job to clearly document the history of the city. 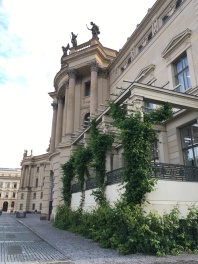 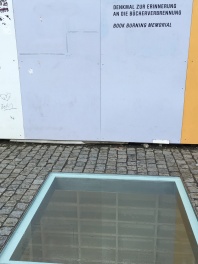 Look underground for the memorial to burned books. You can see the empty shelves if you look through the window in the pavement

Just liked the art on this one

United across the world

Winding through the maze of the memorial to murdered Jews 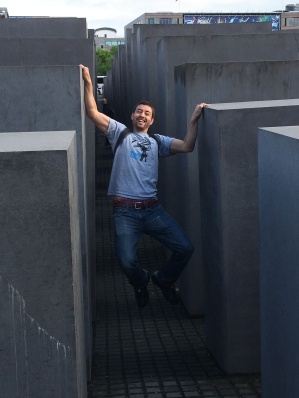 Looks like that shoulder surgery is making a difference.

We made our way back to our neighborhood and voted for a night of sushi after so many sausages during the day.  We ended up walking through some really quiet, and possibly posh neighborhoods surrounding our hotel to get to dinner.  However, sushi at this spot wasn’t much to write about so on to day two.

We started the morning with a full on breakfast buffet at the Hampton by Hilton- YES!  This was a good thing because Corey and I decided over breakfast that after each landmark, we’d need to drink a bier to make up for our lack of German-beer drinking the day prior.

We rode the Ubahn out to the East Side Gallery, where the longest stretch of the Berlin wall lives.  This section of the wall was painted over by 118 artists from around the world (21 countries to be exact) in 1990.  I’d recommend the East Side Gallery.  It explained the history of the walls through photography and video, and it probably helped that the nice lady at the counter offered to give us a child’s ticket price when she could tell that we were wavering between just walking the wall or heading into the museum.  We did walk about a quarter of the wall, but then it started pouring again so to make the best of the weather, we had our first pint of the day.  Pirates Berlin had the feeling of an Applebees, but we had a good time watching the rain showers on the river.

Political art adorns many of the walls here 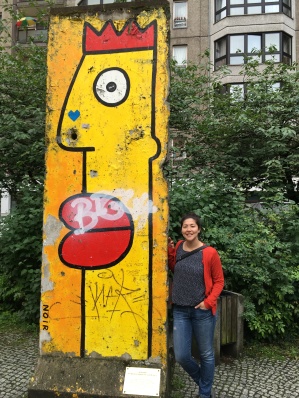 Find them all! Slabs of the wall pop up in various parts of the city (Thierry Noir face)

We visited Checkpoint Charlie which was admittedly a bit less exciting after having just seen the East Side Gallery.  We did spot the Thierry Noir gallery nearby.  Noir is a French artist who painted over five kilometers of the wall with huge colorful faces while under the strict observation of the GDR border patrol guards.  He painted on the parts of the wall along the ‘death strip’, the no-mans-land space between the wall and West Berlin.  He was arrested and questioned numerous times because of this.  He painted the walls at his small gallery shop as well and he still resides in Berlin (age 59). 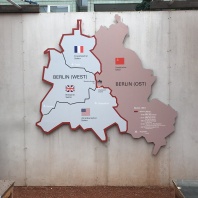 Check point Charlie and probably the most googled soldier ever…I’ll leave you to it.

Our next stop was the Topography of Terror- the site of the most notorious institutions of the Nazi party.  This is where the headquarters of the Secret State Police (Gestap0), the Reich SS Leadership and the Security Service (SD) were all housed. As one can imagine, it was overwhelming to see the documentation of the terror, the crimes and the persecution.  Digesting the information took a toll, but I also got goosebumps seeing all of the school groups touring the space, both high school and college aged. There were some serious lectures lined up which is what a space like this is made for.

Heavy hearted, we knew it was definitely time to fulfill our bier pact.  Hopefully, it would lighten the mood.  We stopped at the Sony Center and noted the wine pop-up market, but only indulged in a sausage roll. We were on the bier mission so we couldn’t get distracted with vino.  We recognized that the biers at Lindenbräu were mixed with add-ins. A Potsdamer was a Berliner Pilsner with lemonade, while a Diesel was a Pils with Pepsi Cola.  Cheers! 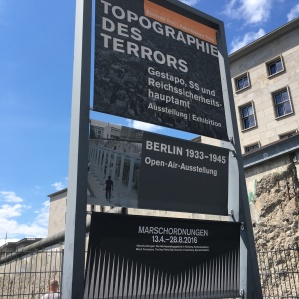 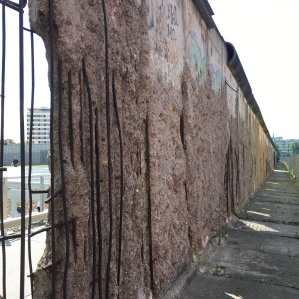 Bier with mix-ins. You’ve got to try it.

We walked to the Reichstag building, strolled along the river and then hopped a train to the next memorial site dedicated to the Holocaust.  We picked up biers in the local supermarket as there were no pubs in the area where I’d directed us.  Actually, it was at that point when we realized I’d marked the incorrect monument on the map.  My error was quickly corrected when we found another bit of the ruined wall, and a recommended bier garden (Prater Garten) in this new neighborhood.  Turn those mistakes into art (that’s a reference to my art teacher and dear friend, Mr. James Reynolds)!  Prater Garten was a lovely outdoor bier garden full of locals, plates of Wiener Schnitzel (veal cutlet), and my unique choice of meatloaf with chanterelles and mash.  Yum yum!

Looking good and feeling good. The buildings were just too grand. 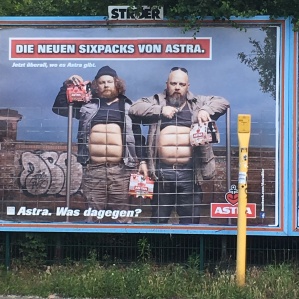 Corey got the bier with cola, and I took a dunkel 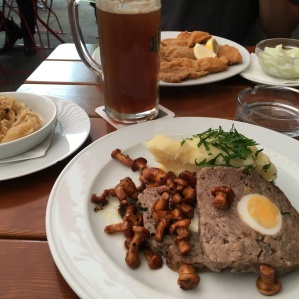 My meatloaf. Yes, Corey’s was better. 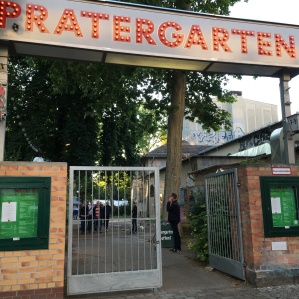 I left super early on Sunday, exhausted and happy, while Corey D took another day and a half in Berlin before heading to Amsterdam and finally, Paris, where we’d be reunited again (see Part 2)!

QuickShot: We did a lot of walking through the city, and spent little time on trains but you can definitely do the sights of the city using the very accessible subway lines.