From the moment we arrived in Marrakech, we completely lost our sense of direction, and owning this fact was the start of enjoying our experience here.  The weather was beautifully warm in March so I felt like getting lost actually couldn’t get me down.  Besides, within the Medina’s reddish city walls, all roads basically lead to Jemaa El Fna- a huge square that is the centerpiece for story telling, dancing, henna tattooing, snake charming, and head-on-a-swiveling!

I understand why some of our friends suggested we hire guides for the city.  Walking the narrow, winding roads while navigating around bicycles, mopeds, push-carts, and people hawking wares on the ground, proved quite a task on our first day.  A walk that you think will take 10 minutes ends up being 45 minutes because you’ve accidentally made eye contact with store owner whose invited you into their store for tea “with no pressure to buy” or because you’ve gotten pressed onto the left side of the street so that a donkey-drawn wagon can pass by two tourists snapping a selfie in front of spice shop. 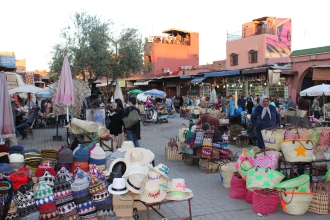 So much to look at!

Fountain found down a narrow alley

Avoid the monkeys on a leash, please

Our flight into Morocco landed a bit later than expected, and shifted our mapped-out  itinerary for the first afternoon.  I laugh when I think that we pre-printed maps for this specific trip…definitely doesn’t work like that in Marrakech.  With our googlemap photocopies in the rubbish bin, we looked to our riad host for ideas.  Rashid said 3pm would be a perfect time for a hamman to wash away any travel fatigue. Score!

Our guidebook stated that Hamman Ziani was an ‘upmarket tourist hamman’- yet we were the only tourists there.  We enjoyed a vigorous head to toe scrub with a rough, flannel glove called a kiis.  Then, we were slathered with oils for a massage and finally rinsed clean with a small plastic bowl in a hot water basin.  Both of us emerged feeling squeaky clean, relaxed, and ready to take on the world… actually, we were just ready to take on some mint tea in the relaxation room.

We took our first venture into the souks, a crammed section north of the Jemaa, full of workshops and stalls selling crafts, olives, spices, leather in all colors and shapes, dried fruits, metal mosaic-like lanterns, pottery, rugs, and knock off designer brands.  We became pretty invested in haggling and tag-teaming during our purchases.  Some of the most entertaining moments happened while keeping a tally of who had the best comeback lines when bartering…of course, the salesmen of Marrakech beat us ever time!

Any leather, any color

Any spice you’d like. I went nuts for the saffron

We left the souks feeling a bit dazed, yet excited that we could already feel the energy in the Jemaa heating up for Friday night.  All of the food stalls in the square basically sell iterations of the same thing but the staff from each stall swore that their food was ‘finger-licking good’ in seven different languages. If business school students want to gain experience in sales, then the Jemaa is the place to do a summer internship.  The guys can pitch their kebab, orange juice, or steamed snails in about five seconds, and actually make you feel like ‘stall #31 is the diamond in the rough’.  We ate harira, a bean soup, and became addicted to mssemen, an oiled flatbread with grilled onions inside. I ate one every day we were in Marrakech.  We finished our night at Cafe Arabe, a very touristy terrace bar full of wine and cocktails that you can’t find everywhere as this Muslim city doesn’t have a big drinking culture.

All sorts of skewered meats to grill

By day two, we had pretty much abandoned my guidebook.  The Riad Linda staff prepared us an 8am breakfast of eggs, grainy rounds of bread, and a spongy, sweet flapjack.

We made our way to Ben Youssef Madrasa, the Koranic school north of the souks.  It was exciting to be the first to enter and have the impressive and intricate walls of the school to ourselves.  We wandered through a maze of peaceful prayer rooms just in awe of the architectural design. 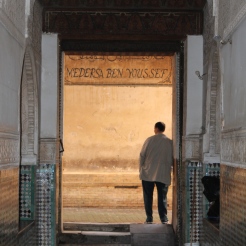 Next, we ventured towards the outskirts of the old city to see the tanneries.  The tanneries weren’t just set apart from the souks because of the smells but also because of the need for large vats of water.  There were two tanneries on Rue Bab Debbagh- one Arab and one Berber.  We learned this from a man who offered to be our informal guide.  Yes, we knew to be aware that we’d basically pay-out-the-wazoo for anyone even offering to take us around the corner, but this gentleman had a Gandalf-like air about him, and offered us a sprig of mint to hold to our noses as we entered the Berber grounds. 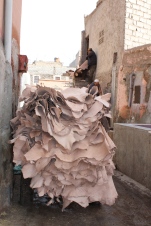 We side-stepped workers hauling carts of dripping cow, sheep, goat, and camel hides.  The hides are soaked in pigeon dung, and then moved into limestone wells.  This process softens the hides and removes the hair.  Men in large, thigh-high boots jump into these pools of pigeon ‘ish all day to turn the hides, which I’d describe as jumping into an oversized janitorial mop bucket after an eight hour shift.

The Saturday market near the tanneries was buzzing with odd shaped carrots and onions, hanging racks of unrefrigerated meat, and bunches of herbs unidentifiable to my American palette.

We picked up another mssemen snack, and taxied to Majorelle Jardin, our first stop in the Ville Nouvelle  (new city).  Majorelle is a botanical garden created by Jacques Majorelle, but its claim to fame is that Yves Saint Laurent was the subsequent owner.  We honestly weren’t very enchanted by the garden, especially given the fact that there was an NFL player in our midst! 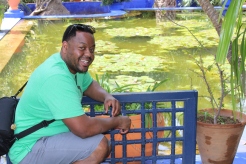 Corey was so stressed because dude’s name was on the tip of his tongue for an hour before we deftly ducked into a shop so that we could check him out, side-eyed. I noted his calves had a large ‘M’ and ‘B’ tattooed on them, the clue that helped detective Corey name our John Doe:  Martellus Bennett!

Foiled! We misidentified our man! To add insult to injury, our cab driver promised us a cheap, traditional meal for lunch which ended up being the most expensive meal we had our entire trip!  In a palatial room, decked out with tourists taking the tasseled caps off of the musicians to snap photos with them, we shook our heads at ourselves.

In the afternoon, we had a series of slightly anticlimactic events. We unsuccessfully tried to sneak into Bahia Palace, and then got lost in the Mellah (Jewish quarter) and the spice market.  We did find a different palace – El Badi- though we quickly realized that the palace was actually a ruin that is currently trying to find a new identity as open-art sculpture park (with very few pieces on display). The terrace overlooking the palace grounds was the best bit, but we were beginning to feel like our afternoon needed a bit of zest. Back to the souks for more bartering! That night, we even haggled an excellent cab fare to the Al Fassia restaurant.  Al Fassia is set in a beautiful garden and it’s got an all female entrepreneurial staff. Clearly, the setting for the best meal we ate in Marrakech. 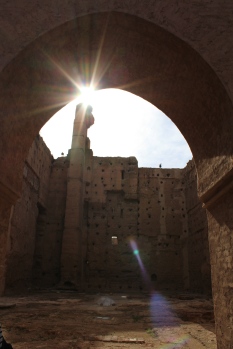 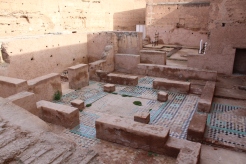 During our last day, we chose an excursion out to the Atlas mountains, the backdrop of the red city.  Our tour guide, Tofik, spoke five languages, studied finance, and recently hiked Toubkal, the highest peak in North Africa.  The tops of the Atlas mountains were still covered with snow, and we discovered a small ski park full of Moroccans sledding and renting out unwieldy pairs of skis.  We looked pretty hilarious having tea at the top of a snowy mountain in basketball shorts while locals were covered head to toe in ski gear.

Winding down the roads into the Setti Fatma valley was breathtaking.  Berber communities build their homes into the side of the mountains, and each area has their own official mosque and leader.  The valley was a striking green, and the river rushing along side us changed from clear blues to deep greys to muddy reds.  We climbed over rocks to reach a small falls, and were shocked find dedicated souvenir shops all along the trail. 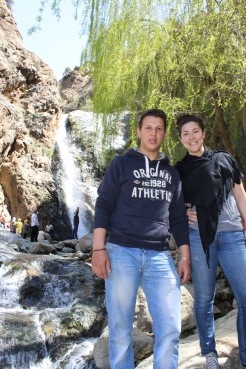 The entire river is actually flanked by restaurant stalls with brightly colored plastic or leather chairs and deck umbrellas. We had overflowing tagines and a tasty tomato salad after our mini-hike. Oh, and you should know we saw ‘MB’, the NFL player, climbing up to the falls as we were heading down. Yes, we’d done our research on the brother- Michael Bennett- a pro-bowl Seattle Seahawks DE with a superbowl ring!!! I joked with him, as we were picking our way over a huge granite rock, that it probably wasn’t the best time to get his autograph. 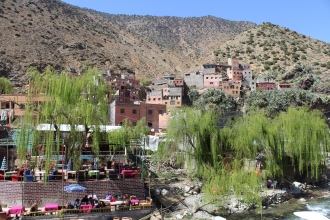 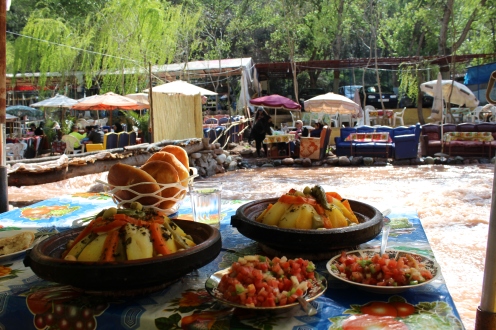 Once back in the city, we spent our last dirhams on saffron, a cutting board, scarves and some olives. Dinner was on a terrace overlooking the Jemaa, and we felt so happy to see the square from above with its twinkling lights, humming drum circles and steamed snail stalls below. 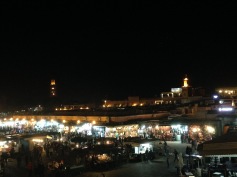 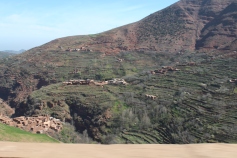 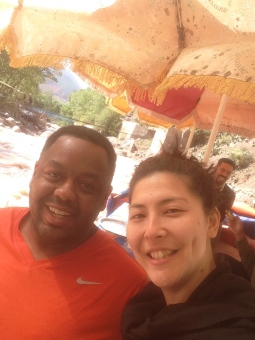 I think I’d sum up Marrakech by saying this: 1) it was a really wonderful way to spend our bank holiday, and 2) I can see why not everyone else might feel like this.  If you yearn to get off the beaten path, and you aren’t willing to adjust America’s personal space radius for a Moroccan one, then I envision a different choice in your future vacation destination. It is notably touristy in the old city, and we worked with that, enjoying the major sites and dedicating time to getting lost.