Friends! In a cab this weekend, I had my first moment where I recognized the neighborhood that we were driving through!……Bloomsbury!

Woo Hoo! My walking is paying off. My ‘Moves’ app tracks my paces and on Friday, I walked 20,525 steps (the equivalent of 10 miles)! I promised myself to walk up every flight of stairs, including the escalators, and managed to do this the entire day.

My walk started in Covent Garden, at the Apple store, where Wayne from Seattle, fixed my ipad. Score.

The queue at Covent Garden. They really need to allow people to sign up online.

Little lane in Covent Garden while I wait for Wayne.

I hit up the RunnersNeed store for a new pair of running shoes. I’m a Mizuno fan to the core. This shop is at the foot of the Waterloo bridge.

View from the Waterloo Bridge.

Bernie Spain Gardens on the way to Borough Market.

On the walk to the Museum of Food. It looks like an smaller enclosed neighborhood. 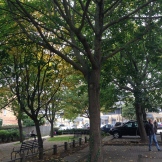 There are so many wonderful green spaces here.

A view from my chair at Borough Market. I was apparently sitting in the ‘break chair’ for the fish and chips workers.

I made my way across the bridge, through various businesses, Maiden’s Lane, Borough Market, to the new pop-up British Museum of Food.  The goal is for the three month pop-up to find a permanent space to celebrate and study the history, sociology, and art of food. For five quid ($bucks), I was able to be the food that travels through one’s digestive tract, I tested how chocolate might taste differently depending on the sounds around us, and noted that bees aren’t the only pollinators around in the Butterfly Effect room. Small space, but I support their idea and I hope they find a permanent space in London.

I’m a bolus in the peristalsis experiment! That chair was the best massage I’ve had in a long time- even for four minutes!

The museum showcased a variety of menus. This one was made to look like an IKEA instruction manuel.

Sweet fruit as a treat for the butterflies.

I just liked the way the city is in the background of this shot.

The room brought me back to Marine World when they had a tropical room with the large plastic flaps that separated the butterflies from the harsh world outside.

I took the train to Hampstead to finally see Hampstead Heath, an outdoor space full of winding trails and falling leaves. I caught a FaceTime call with my mom at The Holly Bush pub, and then toured the surrounding Hampstead neighborhood- very hilly and very wealthy.

Hampstead Heath! I’ll be back when it’s not dusk, and I have a partner to walk with through the woods.

Starting the journey to Hampstead Heath.

Listed in the tour books, and also by word of mouth, the Holly Bush is a great spot for a pint- complete with a fireplace!

Half a pint and FaceTime with my mom.

Onto the Bloomsbury for the Festival of Lights (thanks, TimeOut London). The entire street was dedicated to Light, contemporary art, and mulled wine (it’s starting to be the season for it!).

One gallery had a lot of upholstered doggies.

Free portraits! I’m so jealous I couldn’t stay to have one done.

One of the realtor offices had an entire model of London. It just wouldn’t fit in the frame.

The lights on the building were at the exit of the street.

Hundreds of flames along the entire block. 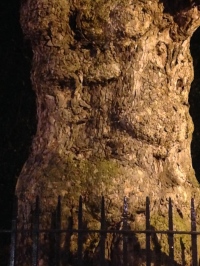 Do you see what I see?

Saturday, Corey and I explored Camden Market. For me, it was a mix of Telegraph Ave in Berkeley and Chinatown, NYC. The rows of t-shirts, shoe stores, and smoke shops were incredibly dense- a pickpocket’s dream as you are wandering along these packed streets. Our guidebook suggested the food booths in the West Lock as a better choice when compared to the Mid- and East Lock, but overall, I was left wanting more.

We had ended our night at the Pig and Butcher with Nirav, a co-worker of Corey’s, and his partner, Melissa, who has been hooking me up with the tutoring opportunities! The smoky beer was so tasty, as was the thick peasant bread with Corey’s seafood stew. 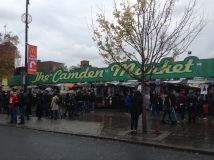 The maze of t-shirts. 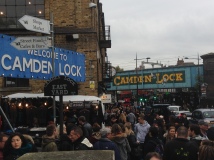 The lock actually works and draws a large audience. Corey had so many questions that I couldn’t answer.

Pulpo! We missed this stall!

The Pig and Butcher meat menu.

Another Sunday Funday~ The Bills and Jags played at Wembley Stadium! The entire stadium was given Jags flags because the team has hosted games in London for the past three years. That was a bit of a downer seeing as we were there with an entire bloc of Bills fans. I can’t imagine watching a football game at this stadium- a real football game- because the fans must go nuts. But for American football, it was a funny mash-up of random jerseys- Steelers, Niners, Titans, Seahawks, etc -BUT all waving Jaguar flags!?! Haha! The day was filled with jokes from Corey’s boys, unhealthy food choices (an actual TV dinner fish finger sandwich on wheat bread), and of course, a few pints. Wouldn’t have missed it for the world. 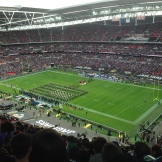 The only row of Bills fans in the whole spot. 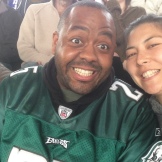 The stopped traffic getting back onto the tube. London wasn’t ready for the NFL. Luckily, no USA chants were started.

Shoutout to Eula for being brave enough to ask a question on The Read. Kid Fury and Crissle traveled to do a live show in Seattle, and I heard my cousin’s voice from thousands of miles away on their podcast. So neat!

Shoutout to Gary for your humor and your organizational skills. We’d be lost without you.

Shoutout to all the mamas and papas who might be dressing up their little ones this Halloween. Please send me pictures! I miss your faces, and of course, the chubby cheeks of your baybes.

Finally, a BIRTHDAY SHOUTOUT to Mrs. ‘Momma Margaret’ Spells!!! Thank you for loving life and teaching others to do the same.  Your honesty and perspective make you a great story teller and a one-of-a-kind mom. I know that I hope to be as graceful, gorgeous, and energetic when I grow up! Love you.